How To Do The Dumbbell Concentration Curl

This is a great exercise for maximizing mind/muscle connection, an essential component of muscular development. In this guide, we've explained how do to concentration curl correctly with tips, variations, and more. 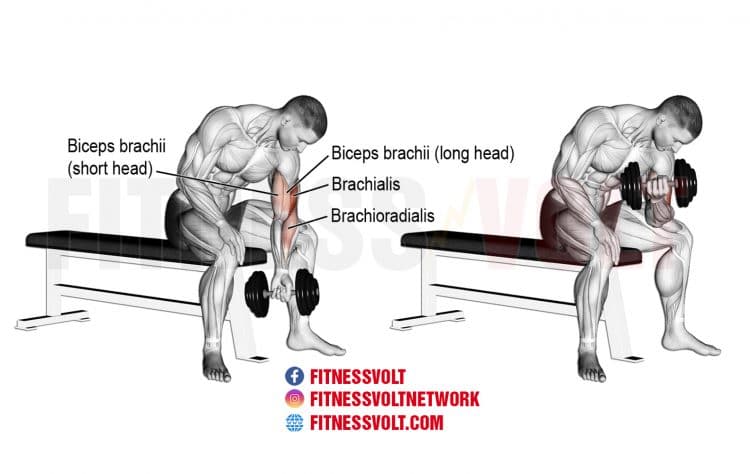 But since it’s not a compound exercise like the barbell curl, many think it’s not as beneficial. However, this couldn’t be further from the truth. In fact, a study by the American Council On Exercise (ACE) found the concentration curl to be superior to other popular biceps exercise variations (1).

The reason being is because it prevents the assistance of other muscles such as the shoulders during the exercise.

It’s also a great exercise for anyone at any level of training. So, make sure you include the concentration curl in your sessions with your other bicep exercises for maximum growth potential.

While the dumbbell concentration curl is primarily a biceps exercise, it also works other muscles of the upper arm too. Here are the muscles worked during this exercise.

The biceps brachii or biceps for short is a two-headed muscle located on the anterior or front of the upper arm. The biceps crosses the elbow and shoulder joint and therefore functions at both ends, although, its primary function is at the forearm end where it supinates and flexes the elbow.

The concentration curl really allows for a pronounced contraction and supination of the biceps which is the formula for building impressive biceps.

How To Do The Dumbell Concentration Curl

Here are three variations of the dumbbell concentration curl that we recommend.

When you think of the standing concentration curl, you might remember the scene from Pumping Iron where Arnold Schwarzenegger did this variation while he giving his famous quotes.

Although it’s not exactly G-rated, but we’ve provided the video below (just this once)…

The dumbbell reverse-grip concentration curl is the dumbbell curl in reverse. It focuses on the brachioradialis muscle of the forearm that has a mechanical advantage when the forearm is facing down.

it’s performed exactly the same with the only difference being hand position.

The cable concentration curl is another excellent variation because you can do it in so many different ways. You can do it similar to the seated variation or you can do the standing overhead cable curl.

Here’s a video of the standing overhead cable curl.

How To Incorporate The Dumbell Concentration Curl Into Your Training Routine

It’s quite simple actually, but we recommend using a little strategy to get the most out of your biceps training efforts.

Choose the exercises that allow you to use the most weight first and save the lighter movements for last. For example, if your biceps workout includes barbell curls, hammer curls, and dumbbell concentration curls, you’ll obviously want to start with the barbell curl.

Although, if you don’t plan to train heavy or you’re just focusing on a few movements to isolate the muscles then it doesn’t matter the order in which you incorporate this exercise.

Other ways to include this exercise are as part of a superset where you do two exercises back to back with no rest in between and as a pre-exhaust method.

For the supersets, choose another exercise to pair up with the concentration curl such as the cable triceps pushdown. Do one set of pushdowns then jump right into a set of the curl, rest, and repeat.

For pre-exhaustion, perform one or two sets of 15-20 reps for the concentration curl before you do a back workout. What this does is it prevents you from using too much biceps and it forces the back muscles to do more of the work as it should.

When training smaller muscle groups such as the biceps, you want to avoid doing too much volume. But it also depends on your goals, and experience level too because not everyone will benefit from doing the same number of sets and reps.

Generally, though, we’d recommend 3 sets of anywhere from 8-20 reps to ensure that you get the most from this exercise. Also, make sure to take your higher rep sets to failure.

The dumbbell concentration curl is one of the best isolation exercises for the biceps. It’s may not be as popular as it once was but the proof is in the research.

So go ahead and include it in your arm workouts and make some more gains!

Adjustable dumbbells are not some passing fad. Many brands have come out with their own version of the technology and...

The Kettlebell Figure 8: Muscles Worked, How To, Benefits and Variations

Dumbbells are an amazing addition to any workout! Whether you’re at the gym or working out at home, dumbbells offer...