How To Do The Dumbbell Lunge (Legs)

The lunge is a must-have exercise in your leg-building regime. Not only does it allow you to train each leg separately but it involves movement that carries over to athletic and general every day activities. In this guide, we've explained how to do it with tips, variations, and more. 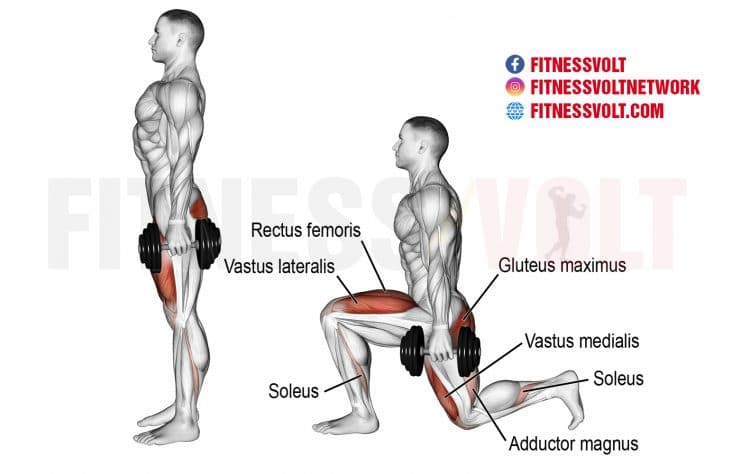 If you want to maximize your leg development, you should definitely consider including the dumbbell lunge in your lower body workout routine if you haven’t already.

Not only does it offer one of the best ways to train your legs individually (unilateral exercise) – it has superior athletic carryover, and whether you have access to weights or not, it’s a fantastic exercise that you can easily add more resistance to with anything you have lying around.

Keep reading to learn more about the lunge and how you can effectively include it in your training to improve your leg development.

The lunge primarily works the hips and leg muscles but the core is also heavily engaged. Learn more about the muscles worked/involved below.

The gluteus maximus, aka buttocks, is one of the three gluteal muscles. It’s considered a part of the hips and makes up a lot of the superficial appearance of the hips and butt.

This muscle extends and externally rotates the thigh. It also works with the pelvis and femur.

Lunges are one of the best exercises for working the butt muscles and you’ll almost certainly always feel it the next day.

The hamstrings, located on the lower posterior opposite the quads, have four heads; semitendinosus, semimembranosus, and biceps femoris.

The hamstrings extend the hips and flex the knee and are very prominent in explosive type movements such as sprinting and jumping. It’s also a very important muscle for the gait (walking) cycle and is a dynamic stabilizer of the knee joint.

The quadriceps is essentially a four-headed muscle that is located on the front and lateral portion of the upper leg. It plays a big role in athletic movements of the upper body and its functions include knee extension, hip flexion, posture, and walking support, and maintenance of patellar stability.

The adductor magnus, along with the pectineus, adductor longus, and gracilis compose the adductor group of thigh muscles that originate at the pelvis and insert into the femur.

To adduct the thigh means to bring it toward the midline of the body. But these muscles also stabilize and balance the pelvis on the lower body during walking.

The soleus is one of the calf muscles on the lower leg that is not as visually prominent as the bulkier and larger gastrocnemius.

The calves are responsible for plantarflexion (pointing the toes down) of the foot and ankle and are important for movements such as running and jumping.

How To Do The Dumbbell Lunge

The basic stationary forward lunge is one of the best unilateral lower body exercises. However, there are variations that offer advantages. Here are four that we recommend.

You probably incorporate walking lunges into your workouts. It’s a good way to mix things up and actually helps to press through your midfoot and heel rather than your toes.

So instead of doing a lunge in place, simply walk forward for the desired distance while doing your lunging.

This is the better variation for those with knee pain. That’s because the exercise starts with the foot of the working leg on the ground whereas, with the standard forward lunge, the foot has to make contact with the floor before the descent and this can be a problem for some people’s knees.

The rear lunge also helps to avoid moving the knees too far forward over the feet. There is no doubting the advantages of this lunge variation.

The difference between a lunge and split squat is that during the lunge, the foot can move in different directions. The lateral lunge is a popular variation that works all the leg muscles and especially the inner thigh muscles.

The Bulgarian split squat is one amazing lower body exercise variation and everyone needs to add it to their training repertoire.

It’s unilateral so you get the athletic component but it does require more balancing as well which makes it very functional. It’s a great option for those with knee issues and you can load it with heavy poundages to increase strength and size.

Here’s an awesome guide on this must-have exercise.

How To Incorporate The Dumbbell Lunge Into Your Training Routine

Lunges are a very versatile exercise. That’s because even though it’s not your typical bilateral compound movement (e.g., barbell squats, deadlifts, etc), it still effectively worked several muscles at once.

Of course, we recommend doing the previously mentioned exercises first because they allow you to move the most amount of weight. But lunges are actually a very effective standalone exercise.

In other words, on those days when you don’t have access to weights or if you need a challenging but minimalistic exercise to finish your leg workouts, the lunge is perfect.

Not to mention, there are several incredibly effective variations.

An example of a typical leg workout that includes lunges looks something like the following:

Now, this is where the standard lunge differs from squats and deadlifts. You will not be able to use as much weight and it’s not recommended either.

Usually, lunges are done with moderate to higher rep ranges and this is probably better for the knees anyway. Still use challenging weights but leave the heavy stuff for the Bulgarian split squat for example where the feet remain closed chain throughout the exercise.

The impact and maximal weights can eventually cause knee problems for a lot of people.

Related: Lunges vs. Squats – Which Exercise is Best?

If you want good-looking legs (and hips), the dumbbell lunge can help along with your other lower body exercises of choice. It’s simple and you can do it everywhere but it’s not for everyone and that’s OK.

There are several other variations that work just as well and have their own advantages too.

How To Do Barbell Rack Pull (Back)