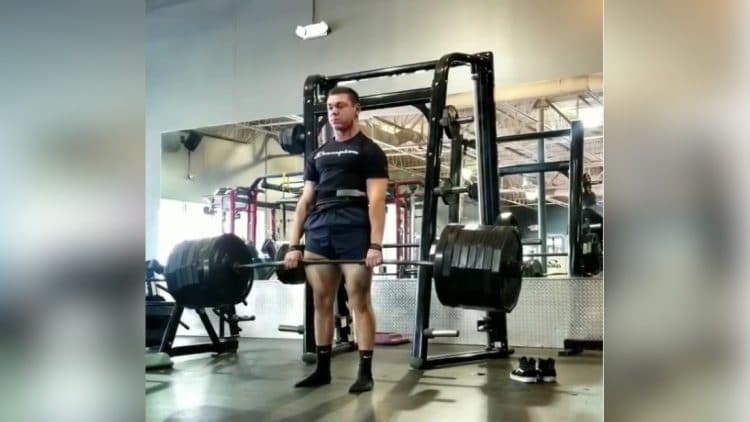 Dylan Crawford is a up and coming powerlifting prospect, out of New Hampshire. Recently he was in the gym, showing off his ever-growing strength, with a massive deadlift.

Crawford has been competing in powerlifting since 2016, winning four contests in his career thus far. Moreover, he has captured state records for all of his lifts in the -93kg division. All of this, while still only being 19 years old, has quickly made him someone to add to the growing list of young prospects in powerlifting.

Unfortunately, Crawford got third place in his last meet, which was the 2019 Raw Nationals. Regardless, this was by far the biggest stage he had competed on so far, so he still gained a ton of respect. As a result of the third place showing, he has been looking to get stronger, and have an even better 2020.

Well it would appear that this work is starting to pay off, as evident in a recent Instagram post from Dylan Crawford. The video shows him in the gym, crushing an absolutely massive 725lb deadlift. Not only that, but he made the lift look nearly effortless, even though it was more than three times his bodyweight.

Take a look at the incredible pull:

There is a lot to breakdown here, regarding why Crawford looked so impressive. First of all, as previously stated he sliced through this lift like a hot knife through butter, even though it was pretty large for his weight. Furthermore, when compared to the 623lb deadlift he hit in October, this shows how hard he has been working. To add 100lb to your deadlift in four months is a ridiculous rate of growth.

Dylan Crawford seems to show at every turn that he is getting better. 2020 seems primed to be a great year for this amazing young athlete.