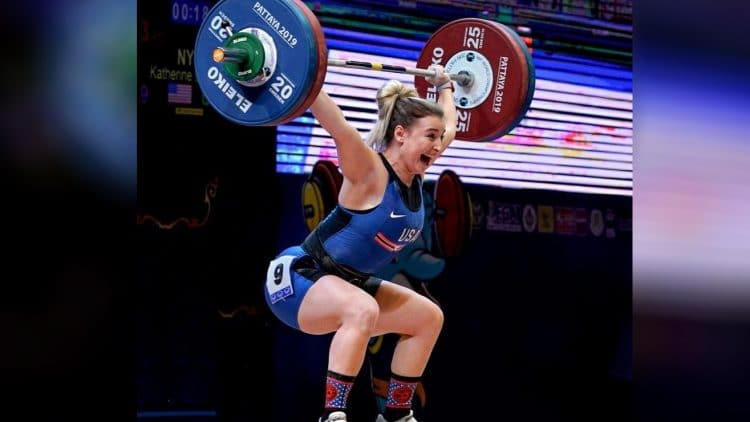 Katherine Nye earning the accolade of IWF’s Female Lifter of the Year (voted by the fans) for 2019 is significant not only because she’s an amazing athlete but because this is the first time since 1982 that a lifter from the U.S. has earned the majority of votes.

The International Powerlifting Federation also announced Lasha Talakhadze from the country of Georgia as the male lifter of the year of which he also won via fan votes by a landslide; which makes it three straight for him (also won in 2017 and 2018). And apparently, this recent election set a new record with just over 50,000 ballots cast online on the IWF website.

You have voted! 💪You choose the Lifters of the year 2019! And the winners are… TALAKHADZE Lasha and NYE Katherine Elizabeth!
Congratulations to them, they're both fantastic athletes! 👊#IWF #weightlifting #athletes #sports pic.twitter.com/rUzyGlFo1V

Both Nye (71kg) and Talakhadze (+109kg) were absolutely incredible last year, each winning the title of world champion in their respective weight categories. But the announcement noted that it was only fair to prioritize the acknowledgment of Nye’s first-time victory which also happens to be a huge deal seeing as there hasn’t been a U.S. athlete to earn the accolade in over 30 years. Not to mention, she’s only 21 years old which definitely adds to the impressiveness.

Nye was extremely proud to named lifter of the year and explained in a recent Instagram post that 2019 was her best year yet. But she also acknowledged Talakhadze as well.

This is what she wrote…

“So proud to be IWF’s Lifter of the Year🎊🤩
I couldn’t have done this without my coach @teamhercwl , all of you who voted, and my wonderful family💗 I had the best year of my life in 2019 and this is just the cherry on top. This is the first time since the 80’s an American has received this honor, which makes this even more cool😎 congrats to @talakhadzelasha_official for winning on the men’s side and all the other nominees! Onwards to an even better 2020 🏋🏼‍♀️🇺🇸“

Talakhadze set a new snatch world record back in 2017 with 220kg/485lbs which is just unreal (watch below by swiping through). Then fast forward to the 2019 IWF World Championships where he combined his best performances (Snatch: 220kg, Clean and Jerk: 264kg, Total: 484kg/1,062) to achieve the all-time total record while simultaneously breaking three world records. The 220kg snatch equaled his 2017 performance.

Then Talakhadze surpassed his clean and jerk world record performance in training with 588.6lb/267kg back in October to add to the insanity. Not to mention, he achieved a 221kg/487lb snatch in training last year before the European Championships. So, it’s no wonder he easily got the majority of votes due to his mind-blowing accomplishments.

As for Katherine Nye… well, this was definitely her year! She became the youngest ever world champion by turning in a 112kg/247lb snatch, 136kg/300lb clean & jerk, and 246kg/542.3lb total which earned her three gold medals. Plus, she earned a spot on the Forbes 30 under 30 list in 2019. So yeah… Nye has everyone reason to be ecstatic about her recent accomplishments.

In the end, there could only be two winners from each category but we don’t think anyone could argue with the results!