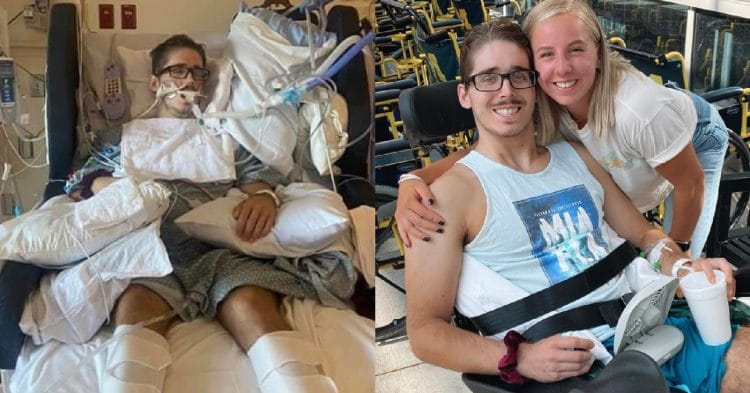 It has been almost three months since CrossFit teen athlete Dylan Kade was diagnosed with Encephalitis. Now he is working towards his recovery and has made some serious progress.

Things were real rocky for Kade, over the last few months. FitnessVolt reported that the three-time CrossFit Games teen competitor was in intensive care, with what was thought to be a life-threatening case of bacterial meningitis. However, as it turns out, he had Jamestown Canyon Encephalitis, a rare bacterial infection spread through mosquito bites, that was hard for doctors to properly diagnose. As a result, the virus attacked his brain and spinal cord, leaving him on a ventilator and fighting for his life.

Now just a few months later, Dylan Kade is back to walking and talking, on the road to recovery. Recent posts to his Instagram have been tracking his progress, which sees him able to walk with crutches and do some basic exercises for physical therapy. He also takes a minute to reflect on how terrifying the last few months have been for him and his family, but how much things are looking up now.

“As many as you know the past few months have been scary and unpredictable for me and my family. One day before I started puking my guts out and getting a bad headache I was doing the Mayhem Madness Qualifers. It only went downhill from there. I got this rare virus from a mosquito bite. The virus usually only causes a common cold in most people, but the virus attacked my brain and spinal cord and caused a large amount of inflammation. I’m the 4th person ever to get it in Michigan. Not the best luck.⁣
⁣
The first four weeks were a nightmare, even though I don’t remember most of it. I only remember the beginning, when my eyes went crazy, vomited excessively, had an excruciatingly painful headache, and I couldn’t look down. After the first week I was hallucinating pretty much the whole time and had dreams of someone always out to get and hurt me. ⁣
⁣
My parents told me some of the stuff I had to endure during this time. I had to be on a ventilator to fix my lungs that collapsed. I had a 104 fever for 4 weeks. I lost 50 Ibs from not eating for over a month. They said that my eyes were open, but I wasn’t there. I looked possessed because my eyes would go in the back of my head and do circles around the room. When I did talk, I sounded like a two year old. I also had tremors for a straight week and then lost movement in my entire body for a couple weeks. My family and the nurses weren’t sure if I’d end up having a trachea, being paralyzed, having permanent brain damage, and there was even a point they didn’t know if I’d survive. My family was extremely worried, but it seemed like it couldn’t get any worse when I started to get better. I’ll talk about that in another post.”

There is still a long road ahead for Dylan Kade, who is going to need physical therapy for a while. However, he has been able to relearn to breathe on his own, talk, and walk, in just a few months. He had lost 55lb in that time but has already began to work on putting that weight back on. The extent of his progress has been nothing short of incredible.

“The doctor told me I might have to get a trachea when I was at the peak of the sickness because I kept getting worse, but my immune system must’ve not wanted a trach because that’s when I started to get better.⁣
⁣
I started out not being able to talk, move my arms or legs, having double vision, super low blood pressure, and eat or drink 😤. My first taste of PT I couldn’t move anything in my lower body. I also couldn’t even sit up in bed without anyone helping me from falling over. When I stood up with help, my blood pressure would get extremely low and I’d pass out.⁣
⁣
Day by day there was big improvements. When I could talk again, then soon after I could sit up better. When I could sit up, then I could move my legs a little bit. Fast forward 4 weeks and I’m doing strict muscle ups, full squats, dumbbell deadlifts, and walking without crutches. Oh, and I’ve gained 20 Ibs back. Without the physical fitness I had beforehand, I don’t know if I’d be here or I wouldn’t be doing as well.⁣
⁣
This has taught me a lot about patience and appreciating the things in life that we often take for granted. I remember being outside for the first time and really absorbing that feeling of the sun hitting my skin. That day I also saw @mia.nightingale for the first time and I got this feeling of excitement that I haven’t got in a while. We have a much stronger connection since this happened.⁣”

Doctors have attributed his CrossFit background as reasons Dylan Kade has been able to recover so quickly. They say that his physical fitness has allowed him a bit of a head start in recovery. Hopefully, things continue to look up in this way, and he will be back in no time.