Eddie Hall And Brian Shaw VS 18lbs Of Sandwiches

Strongman veterans try their luck eating 9lbs of sandwich each 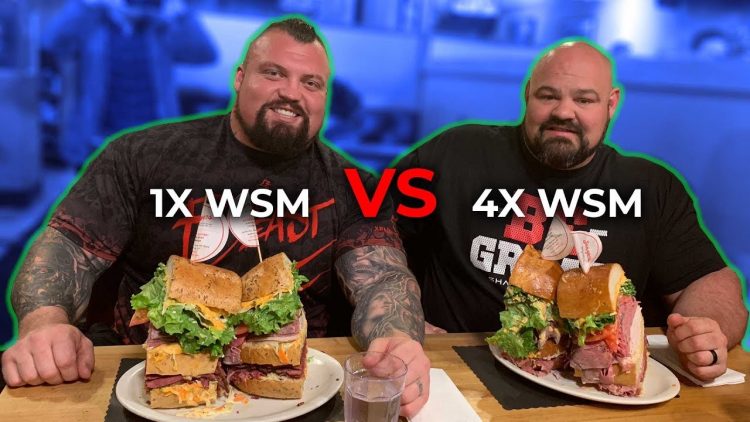 Since retiring from Strongman, Eddie Hall has been a very busy man. He’s been doing seminars, judging Strongman events,  YouTubing and on top of all that he’s been doing tv shows. One of the Tv shows he’s been doing is “Eddie eats America” where Eddie tours America performing various wacky Strongman acts and tries his luck in beating local food challenges.

In the inaugural episode, Eddie has to take on “The Monster” sandwich from a famous New York restaurant “Sarge’s”. To help Eddie not suffer the wrath of “The Monster” alone, he is accompanied by his long-time friend and rival-  4x WSM winner, Brian Shaw.  Brian remarks that Eddie is doing some behind the scenes stuff like showing how the sandwich is made since this will air as a tv show.

When Eddie arrives,  he prepares Brian for the task that is ahead of them. A monstrous amount of food wrapped up in a single sandwich filled with beef, turkey, salami, coleslaw, salad, Godzilla’s heart, and a T-Rex steak.  Eddie mentions that the most someone has eaten was half (roughly 4lbs)of the sandwich, he proposes a solution to finding out a winner of this eating contest from hell. When they are inevitably defeated by the sandwich they, weigh the remaining amount of food and see who ate more, as simple as that.

The two giants get at their sandwiches with different techniques. Eddie skips the bread and the toppings and dives straight into the meat. While Brian, on the other hand, starts eating the sandwich layer by layer, bit by bit. The two exchange jokes and shots at each other while devouring the unearthly sandwich and eventually they both throw in the towel and it’s off to the scale to determine the winner.

The scale shows Brian had eaten just under 4lbs of the sandwich while Eddie has eaten “only” 2.7 lbs of sandwich, making Brian Shaw the clear winner. Eddie tries to get a moral victory with saying he beaten him at eating cheesecake, but alas, Shaw reigns supreme in this eating contest.