No Result
View All Result
NewsOP-ED

Athletes That Could Easily Compete In Bodybuilding 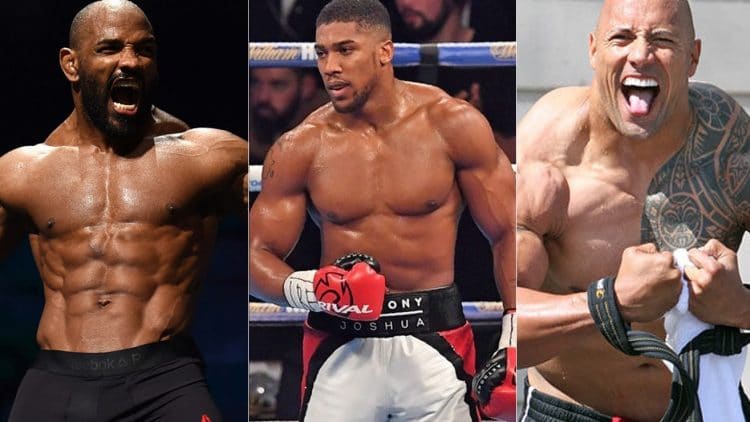 There’s a lot of guys that do not practice competitive bodybuilding but could just as easily go that path and do either moderately “okay” (likely) or even completely dominate the competition(less likely). Here are some of the top ripped, diced, shredded, grainy athletes… 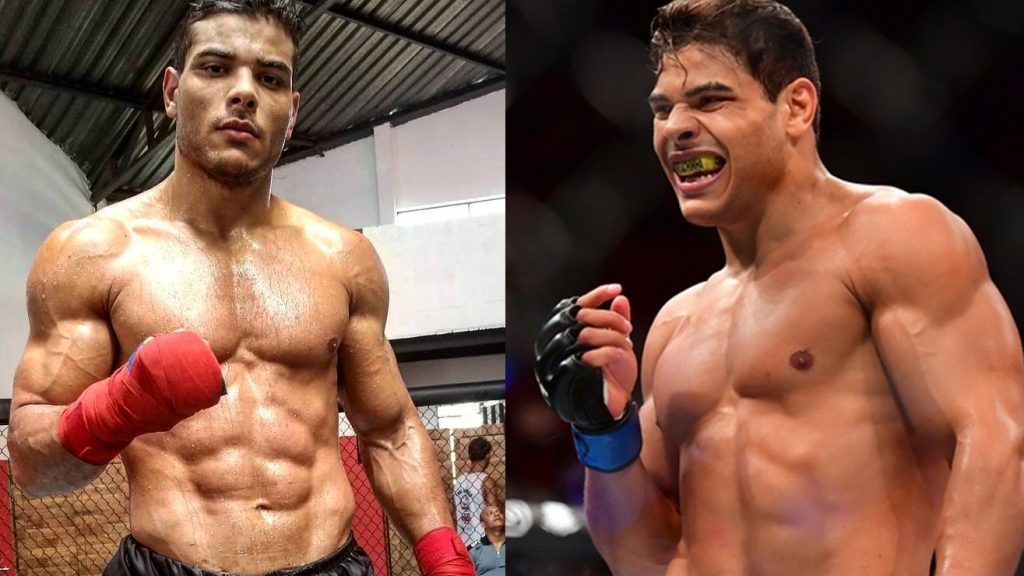 Let’s start this off with a bit less mainstream-friendly name. Paulo fights in the UFC’s middleweight division and he is currently undefeated with 13 wins under his belt. He looks good, is ripped to shreds and he likes to finish fights. This all means he’s one or maybe two wins away from fighting for a title. Like I briefly mentioned, the dude is super fucking jacked.

If you ever trained MMA, you’d know aesthetics and sexy looking muscle mass tend to come in second place when training for a fight. If you just train to look good and not to beat the living daylights out of your opponent you will look good while getting your ass handed to you in a fight.

Well, Costa somehow managed to get the best of both worlds as he has, what I assume is, a single digit body fat and he still manages to beat the daylights out of dudes. 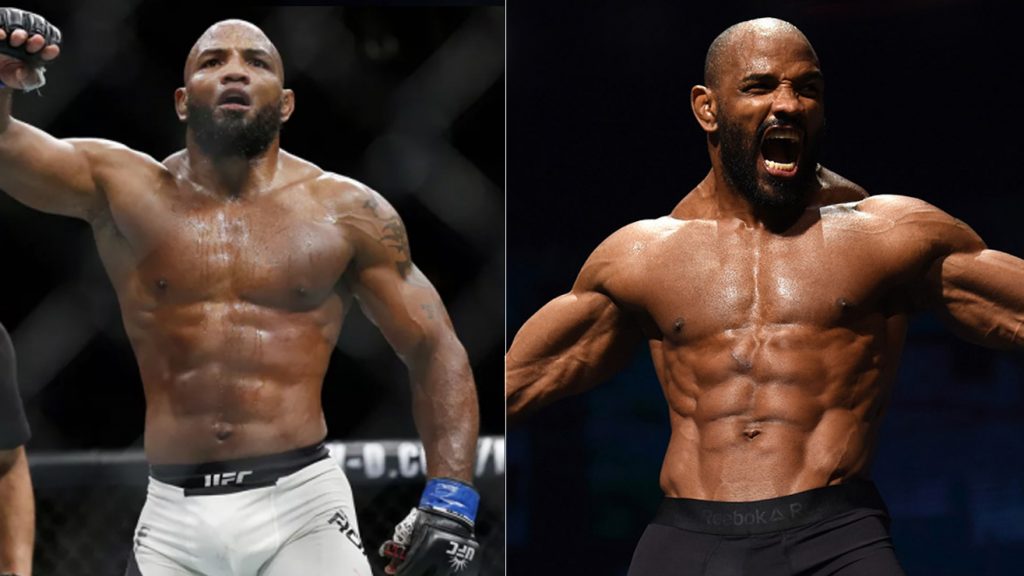 Yoel is a former Cuban Olympic wrestler who got bored of beating guys there so he transitioned to MMA. Even though he is at an age where most competitive athletes tend to call it quits, Yoel just refuses to give up and continues to spread horror in UFC’s middleweight division. He is 41 years old, still has a ripped six pack and a sick set of traps.

Had he decided to just lift weight instead of beating people up, he could easily bulk up and go to the Men’s Open division in bodybuilding. Big Ramy at 5’10” is one of the tallest and biggest guys in the division and Yoel is 2 inches taller than him. So, theoretically speaking, if he would have bulked up in size and step on the Mr. Olympia stage he wouldn’t have gone unnoticed. 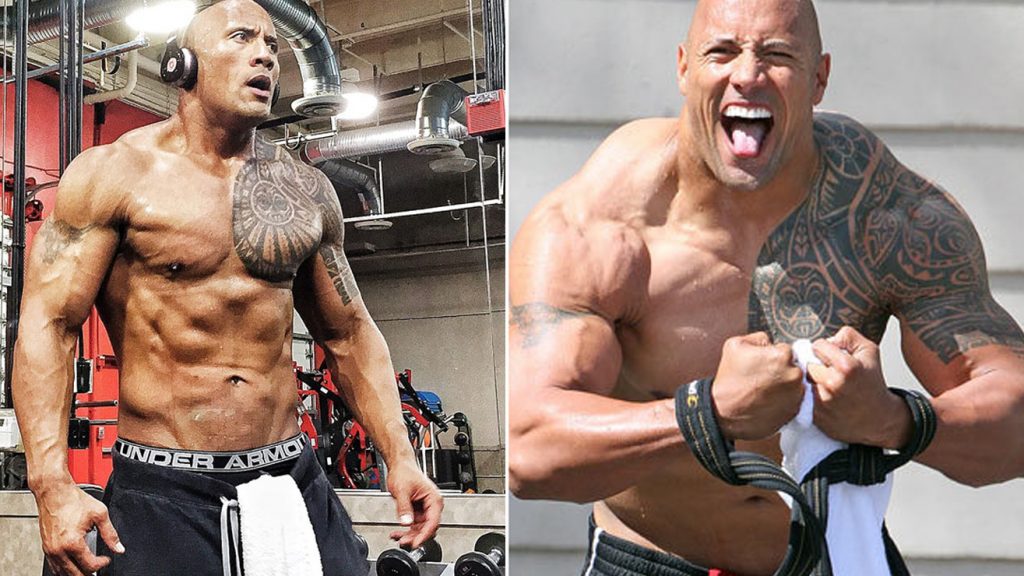 The Brahma Bull, The Most Electrifying man in ALL Of Sports and Entertainment-The Rock. I won’t even waste the time explaining who is he, or why is he famous or why did I decide to include him in this list. You know already know the answer to all of these questions. Ever since he started his transition into mainstream media and slowly started to leave Vince McMahon’s world of chair shots and Rock Bottom’s he started hitting the iron-HARD.

He just keeps growing and growing…physically, metaphorically and financially. Of course, his training methods are mostly movie role oriented, but man you just can’t help but wonder. What if…what if the People’s Eyebrow got raised in a bodybuilding show? 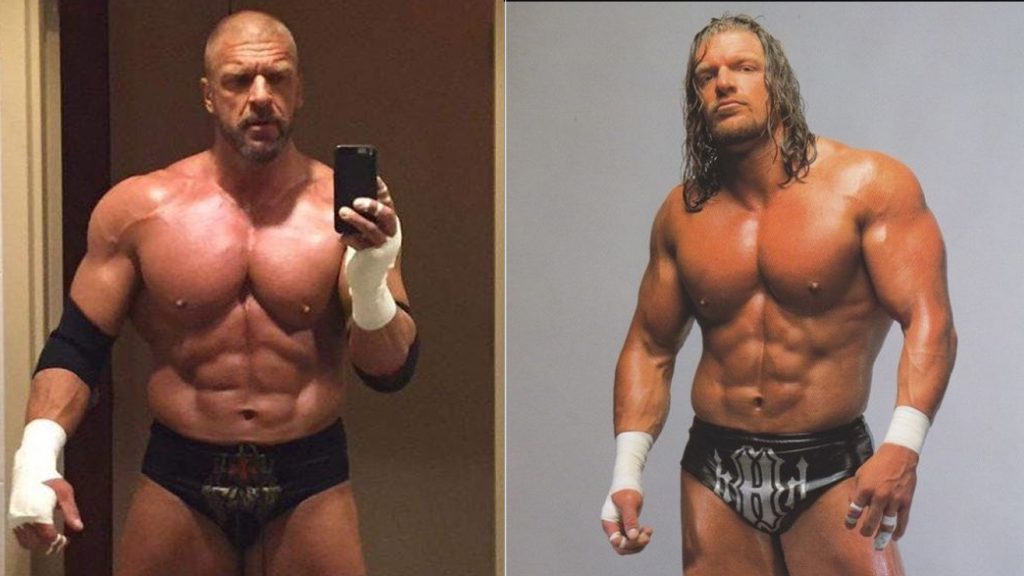 A bit less popular than the superstar formerly known as The Rock, but still very famous. These days Triple H is assuming a bit more corporate and backstage role in WWE, but he still likes to flex his Pedigree skills from time to time. During the ’90s, he was absolutely massive.

Small waist, huge chest with a ridiculously wide set of lats. If we play pretend just for a moment and imagine that by whatever chemical or the natural way he gets that 90’s look back, he could have a Men’s physique worthy physique. 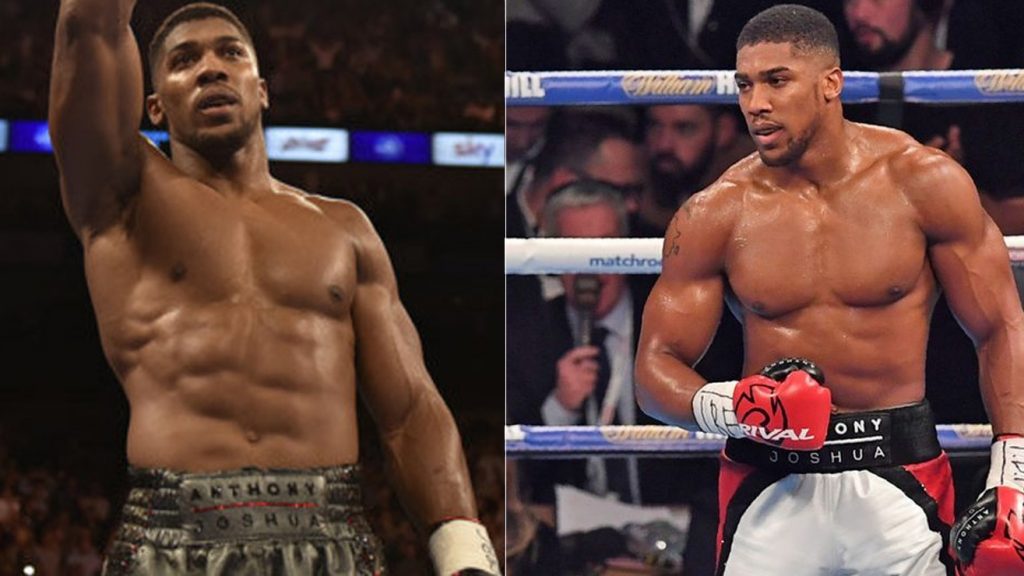 The golden boy of modern boxing. Well spoken Englishman, ripped muscles, Olympic gold medalist, heavyweight champion-everyone want’s a piece of him. He is one of those freaks of nature that is an amazing athlete that looks like a fitness model. He is 22-0 with 21 fights being stoppages.

All that and he isn’t even 30 years old. If for some reason he has a change of heart and says

“you know what, I’m tired of boxing. I want to get mad gainz and see what I can do in bodybuilding.”

He can do so without anyone batting an eye and doubting his success in it. 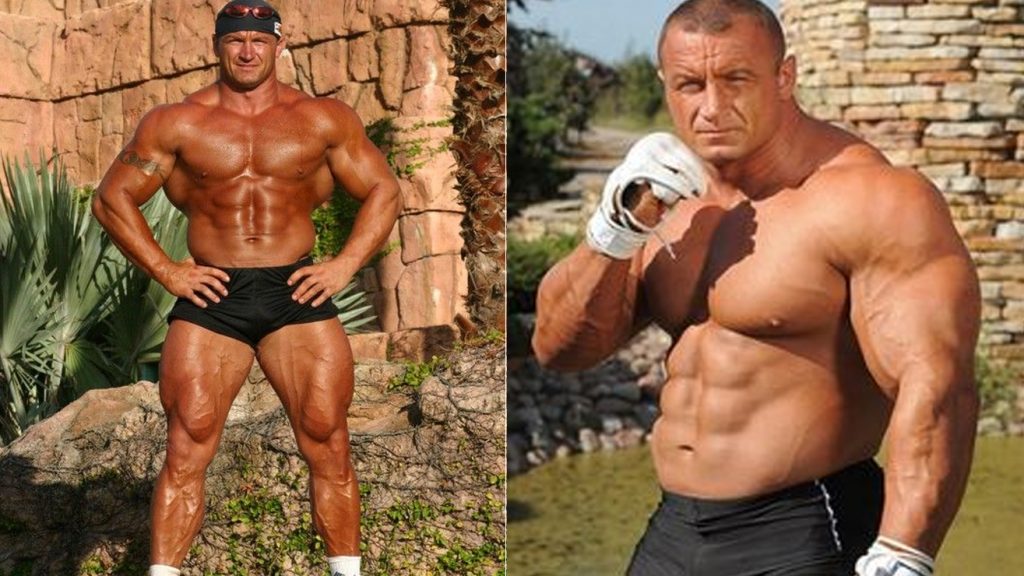 The Polish Powerhouse is one of the greatest Strongman competitors ever, as he has won the WSM title a record-setting 5 times. After dominating the Strongman scene he set his sights towards MMA and he hasn’t looked back since. He has slimmed down a bit since his Strongman days because fighting requires a lot of cardio and endurance and a lot fewer muscles.

Even though he still looks quite impressive even today when he isn’t as huge and ripped it’s nothing like what he looked in his heyday. He was 300 lbs of shredded, veiny ripped muscles. He looked like a bit smaller version of Markus Ruhl, which is ridiculous considering he was a Strongman. 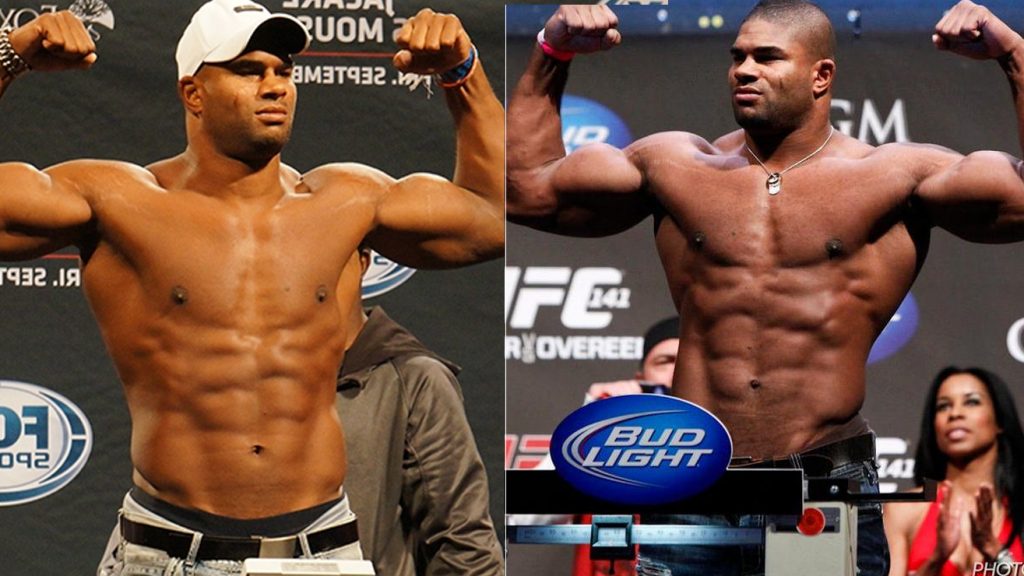 Another MMA fighter who is known to spread fear and terror with his deadly skills inside UFC’s octagon. The Reem started his MMA career as a very skinny and very shredded middleweight. He then bumped up to light heavyweight then went Super Saiyan and bumped his fighting class up to heavyweight. With that began a very memorable and frightening domination streek.

Reem grew bigger and bigger in size from fight to fight( I’m guessing, he fed on the souls of his victims) and his opponents went down in horrifying fashions. He won the Strikeforce heavyweight title, the Dream heavyweight title, and the K-1 Grand Prix title all in a span of three years.

From 2008 till 2011, Alistair looked like a comic book character and fought like Sagat from Street Fighter. If all that wasn’t enough he was jacked shredded, looking like an offseason Classic Physique competitor on a bulk. So putting him on this list is a no-brainer as a no-brainer can get. 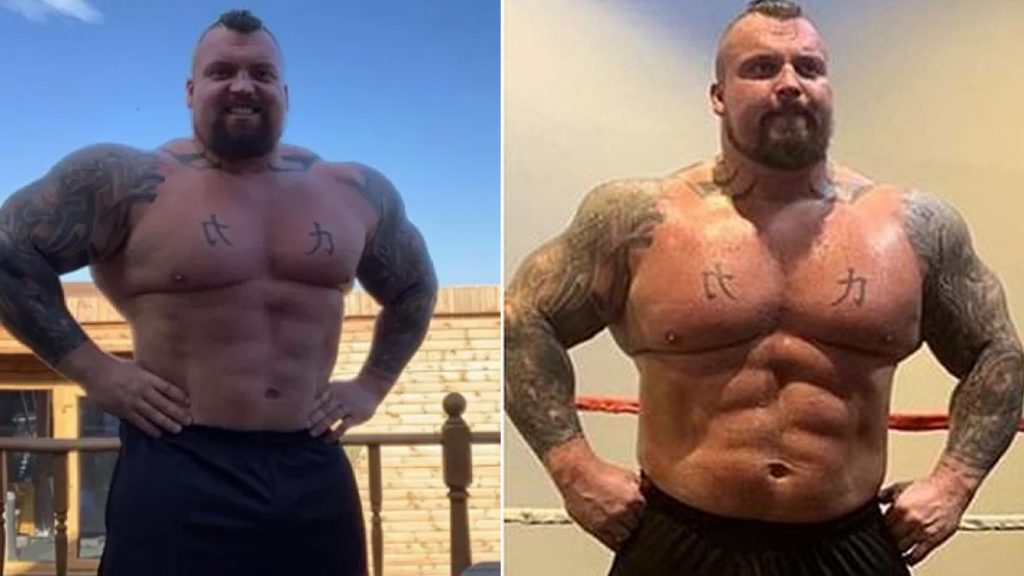 Yes, I am dead serious…have you seen his recent photos? He lost like a 100 lbs of fat muscle and undigested food. Since he went 3/3(meet Arnold, win WSM, deadlift 500kg) with his Strongman goals he decided to call it quits and focus on other physically less demanding activities.

Now, I’m not sure how successful he would be in this theoretical bodybuilding show but if he were to somehow manage to cut down another 40 to 50 lbs, he could be ok-ish. His former Strongman colleague and fellow strong Englishmen, Terry Hollands got so ripped that he was actually toying with the idea of doing a bodybuilding show. If Terry Hollands could do it, why couldn’t Eddie?

Eddie Hall And Brian Shaw VS 18lbs Of Sandwiches