The 2017 World's Strongest Man champion set a new world record for the Isabel WOD and celebrated with a handstand walk. 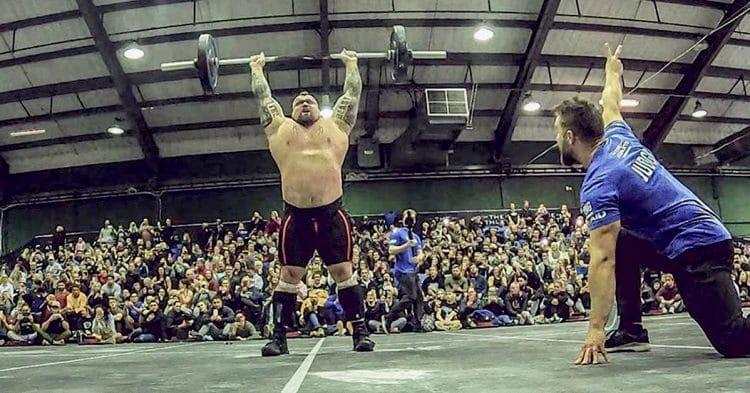 Strongman Eddie Hall is absolutely winning at life and he has been for a while now. The Englishman set the all-time deadlift world record of 500kg/1,102lbs and then a year later he earned the title of ‘World’s Strongest Man’. Not to mention, he also has many Strongman victories to his name.

But there’s something else Hall really enjoys doing and that’s taking on challenges. Well, his most recent one was to break a CrossFit WOD (Workout of The Day) world record at the CrossFit European Championships. Now, he had originally planned to attempt the GRACE WOD which consists of 30 clean and jerks for time with 61kg/135lbs (for men). Power cleans or full cleans are also acceptable for this WOD.

But apparently, and according to the video that was posted to YouTube, he aimed for the Isabel record which consists of 30 snatches for time with 135 lbs (men). And before he attempted the feat, it was noted that Rich Froning Jr. held the fastest time (men’s record) for Isabel with 1:20.

Hall announced that he’d be attempting a world record a little over a week ago and posted a video of him in training (for GRACE) for the big event in Colchester, England. But he probably didn’t expect to break a world record although that’s apparently what he did.

Hall was stoked after learning he had just set a new World record with a time of 50:9 seconds as he wanted to accomplish it in under 55 seconds. Afterward, Hall wrote the following in an Instagram post…

“I said I was going for a world record at the @theeuropeanchampionships GRACE/ISABELLE and guess what?! #BackUpYourBull YouTube video coming soon. Subscribe to the channel, link in bio ↖️ Thanks to @carl_saville for the invite! 🎥 @felicityfilms_
Big Love
Team Beast“

Afterward, Eddie Hall appeared to have a hard time catching his breath and even joked that the record won’t count if he dies. But he was eventually able to talk about the performance and let’s just say that he’s not planning to become a CrossFit athlete anytime soon.

“I’ve thrown the gauntlet down. If anyone in the Crossfit world or Strongman world or powerlifting world thinks they can beat that, come and have a go because I guarantee you’ll have a heart attack.”

Hall celebrated with an assisted handstand walk and then he attempted a few on his own, although he could only hold for a few seconds. But not bad for a really big guy whose nickname is ‘The Beast’.

To conclude, Eddie Hall explained that he didn’t think he could achieve the world record but he’s no stranger to performing at a high level under press.

“As you’ve just seen, put a camera on me, put an audience on me I’ll take a step up and I’ll get it done.”

“Big respect to the CrossFitters it’s a lot harder than people make out and they get slagged off left, right and center on social media but I can tell you now looking at these guys compete today, I genuinely believe it’s going to be one of the hardest sports on the planet to train for and compete in.”

“So uh, that’s me out of CrossFit. You definitely won’t see my on the CrossFit platform, that’s for sure.”

That was quite Impressive from Eddie Hall and we’re positive he’ll be back with more challenges. But for now, you can watch the full video below…