After Hafthor Bjornsson criticized Eddie Hall for not doing any live sparring or exhibition matches, Eddie and his coach explain their methods of training 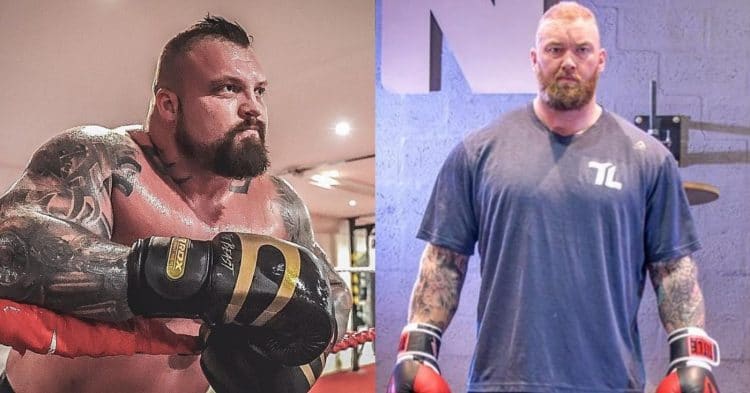 While both Eddie Hall and Hafthor Bjornsson are going from strongman to boxing, their methods of training have been quite different. Now the Englishman responds to Thor’s criticisms of his style of preparing for their fight.

Over the weekend, we saw Bjornsson make his boxing debut against Steven Ward. This was an exhibition match that he did to help him get some ring experience before he fights Hall in September.

Ahead of this fight, Thor took some shots at Eddie for not following in his footsteps by taking his own exhibition match. He said that if Eddie does not do any full contact sparring or practice fights, Thor will easily knock him out.

It seems that Eddie Hall did not take too kindly to these words from Hafthor Bjornsson. Taking to YouTube, he addressed some of the criticisms of Thor, and explains why he is doing the training that he is.

The video is largely a technique sparring session that saw Eddie doing several rounds of defensive movement. However before the training session, he took a second to detail why he has not done any sparring yet.

“Nine months now until the fight with numb nuts, and I’ll tell you what, honestly this is going to be the best nine months of my life. I’m feeling fit, energized, and inspired. I really have that motivation to be the best I can be.

“Sparring-wise, we’ve been doing drills for six months, seven months, and we’er just getting to the point where we’re mentioning sparring,” Hall added.

“I’m learning how to box. It’s pointless getting in the ring unless I know how to box. I’m under the jurisdiction of my coach Lyndon. I’m going to listen to every word he says because if I don’t what’s the point in having him?

“So sparring will start when Lyndon says.”

With that out of the way, Eddie Hall gets to work on his warm up. From there, he moves on to the technique sparring, putting a major focus on his defensive skills, with blocking, dodging, and moving.

All things considered, he does pretty well too, even hurting his training partner with some heavy counter shots. He actually admits to trying to punch at 50% so he avoids hurting anybody in training.

After the training session is over, with Hall doing an extra two rounds, he actually leaves and lets Lyndon close out the video. Here his trainer opens up about Eddie’s progress, and explains their decision to hold off on full sparring.

“Training’s been good. He’s very easy to train with, because he listens, he takes it on board, and he reacts,” Lyndon said.

“It’s no use showing you photographs and things with black eyes, because that means you’re not working on what you should be working on.

“You should be working on not getting hit. That’s the skill of the sport, put yourself in a position where you can punch but not get punched.

“So we’ve done a lot of drills, and still are. We’re doing no full sparring yet because there’s still loads and loads of time before the fight.

“What we don’t want to do is get sharp now, and then go on a downward spiral. So everything we do is aimed at improving ring craft.”

“We’ll probably do three months of full sparring,” Lyndon added when asked what the plans were for Hall as the fight gets closer.

“We’ve got a few sparring partners, big, tall, rangy southpaws that will be coming into the gym. We’ll be training in a full size ring, and we’ll do a hell of a lot of full sparring…

“We’ve got three professional boxers that we’re going to be sparring with. All rangy, six-foot-plus southpaws. That’s how things will change.”

As of now, it seems that Eddie Hall will not be doing any sort of exhibition fights like Hafthor Bjornsson. It is interesting to see the different training styles of these two rivals as they prepare to face each other.

Who do you think will win this fight in September?