Hafthor Bjornsson issues a message to Eddie Hall, imploring him to change coaches and training techniques ahead of their boxing match in September 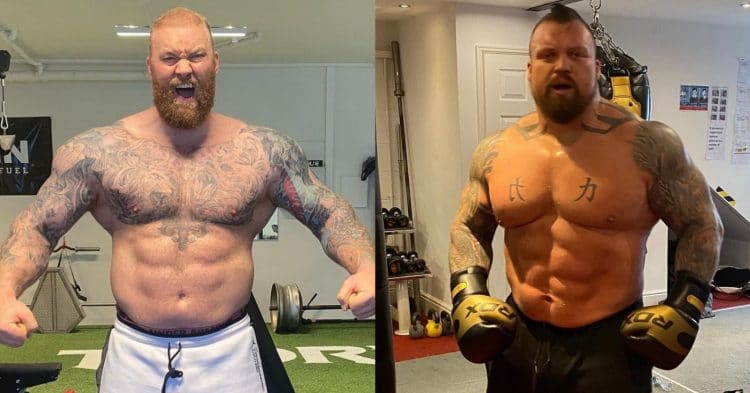 Icelandic strongman champion Hafthor Bjornsson is set to make his boxing debut this weekend, to prepare for his fight with Eddie Hall. Ahead of this bout, he sends a threatening message to the Englishman.

Nobody expected to hear that Bjornsson and Hall were going to be settling their rivalry that started on the strongman fields, inside the boxing ring. Yet this is the case, with the pair set to meet this September.

Both men have been doing their own thing to prepare for this fight, with each finding good results. However Thor decided to take things super seriously by taking some exhibition boxing fights to get in the swing of things.

The first of these fights go down this weekend, against pro boxer Steven Ward. Ahead of the fight, Hafthor Bjornsson decided he wanted to issue a warning to Eddie Hall.

Related: How To Watch Hafthor Bjornsson Make His Boxing Debut Against Steven Ward

Speaking in a recent video, the world record deadlift holder told Eddie that he should change coaches. He made it clear that if Hall keeps training the way he has been, that Thor will have no trouble knocking him out.

“I just hope that you are sparring Eddie, that you’re not just punching a man that’s not allowed to punch back,” Bjornsson said.

“I truly believe that if this your only training, is to hit some pads and to hit a man that’s not allowed to hit you back, you’re gonna get knocked out.

“I truly recommend that you consider a new coach Eddie, because obviously something is not going well for you. I will knock you out.

“You should really consider Eddie, to do some exhibition fights. If you do not, this fight’s just going to be too easy for me.

“I’m going to say one positive thing about Eddie.  I think Eddie is a great actor. He’s able to manipulate so many people around the world. It’s impressive man, congratulations.”

These were some pretty intense words from the Mountain. Hafthor Bjornsson also made it clear that he was excited to take on Steven Ward this weekend, but he is still gunning for Eddie Hall.

With several months to go still before they fight, it will be interesting to see how both men proceed with training. Either way, fans will be watching to see these two monsters inside the ring together this fall.