One down for Hafthor Bjornsson and possibly a few more to go before his big match up against Eddie Hall later this year. 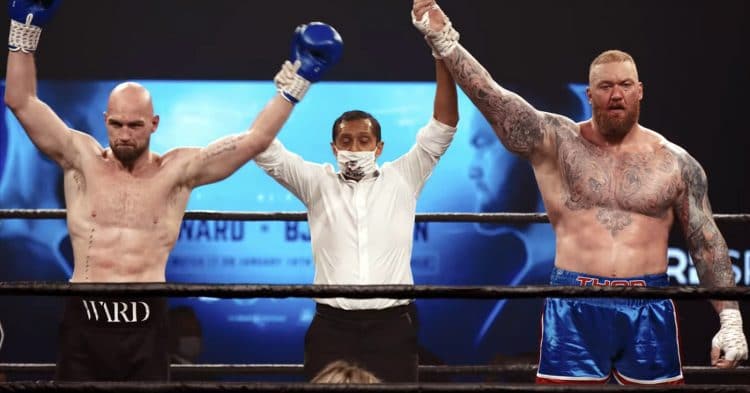 Retired Strongman Hafthor Bjornsson officially competed in his first exhibition boxing match against Irish pro boxer/former light heavyweight European world champion Steven Ward (13-1-0) for a three-round, 3-minute. The match took place on January 15th, 2021 in Dubai but streamed to the public on the 16th. It ended in a draw due to being an exhibition match but that made it no less exciting.

Prior to this event Bjornsson said he wants to analyze his mistakes before the Eddie fight. As Thor and 2017 World’s Strongest Man winner Eddie “The Beast” Hall will face each other in their first boxing match (being billed as “the heaviest boxing match in history.”). It  will go down on Sept. 18, 2021, in Las Vegas.

Ward (30) has been boxing for 19 years, and professionally for 4 with a recent win in September while Bjornsson (32) is relatively new to it and has never competed in boxing. But hey, he holds the all-time deadlift world record and was the strongest man in the world in 2018 to name a few of his many accolades.

This is the lightest Thor we have seen weight wise. Just to remind you when he attempted a 501kg deadlift attempt back in May 2020, he weighted192.7 kilograms (425 pounds).

After the walkouts and introductions, the bell rang and it was clear the pro and amateur. Thor did get off some shots and even knocked Ward over with a hit to the shoulder blade at the 54.17 mark because of his sheer power but Thor also got lit up and hurt several few times but both gave a good effort not holding back.

Ward said of Bjornsson “I thought he looked great, I have never seen a big man move so well, I got a bit careless and he hit me with a shot, shook me in my boots.”

Meanwhile, Thor said getting punched in the face was great and he gave props to Ward for stepping into the ring with a man as big as him.

“I’ve seen your training sessions and you’re just punching this poor guy and he’s not allowed to punch back. If you’re going to beat me, you have to at least spar and get punched. If you’re not taking it seriously I’m going to knock you out in the first round man. From what I’ve seen it doesn’t look good.”

“I promise you I will be in absolutely the best shape of my life, September of this year, and I’m going to lock him out.”

Both Bjornsson and Hall have been training as if their lives depend on it while updating fans of their progress along the way.

The behemoths have shed tons of bodyweight sporting ripped physiques and they are both all-around in much better shape than when they were competing in Strongman competition.

Watch the full match below…

12 Best Pre-Workouts Without Creatine For 2022