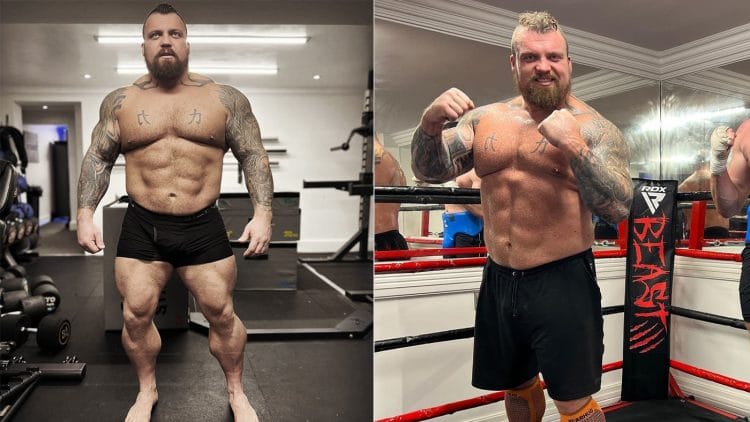 Since transitioning to boxing, Strongman-turned-professional boxer Eddie Hall has undergone a massive body transformation and shed over 75lbs to get the body composition suitable for boxing. Hall recently posted a physique update in which he admitted to have gained almost 5kg after the Christmas weekend.

Eddie Hall posted a shirtless picture on his Instagram account to share the update. The caption to his post revealed that Hall weighed 163kg after the Christmas weekend, approximately 5kg over his weight before the weekend. Despite gaining weight, Hall’s body looks lean. However, the Brit admitted to have felt the additional weight during the run.

“5kg / 11lbs on over the Xmas weekend!!!
Weighed in at 163kg today and fair to say the run was a little harder this morning but training legs was a breeze,” Eddie Hall wrote in the caption to his post.

Eddie Hall’s body transformation came at the cost of a strict diet and arduous training routine that was vastly different from his days as a strongman. Additionally, Eddie Hall suffered a bicep injury back in July that resulted in the cancellation of his boxing match against archrival Hafthor Bjornsson.

Overall, the 33-year-old had a hectic 2021 and needed a break which his nutritionist allowed for the Christmas weekend.

“My nutritionist said I could eat and drink whatever I wanted…. Well after a year of chicken, rice and veg I think my body and mind needed it!


Hope everyone enjoyed themselves and spent some quality time with the family,” Eddie Hall wrote in the caption to his post.

Eddie Hall vs Hafthor Bjornsson is expected to take place in March 2022. However, the exact date and the venue of the event are not public yet. Both competitors have garnered widespread appreciation for taking the right approach to prepare for boxing. Looking at the training videos and physical transformation, it is obvious that Hall and Bjornsson have moved away from the regimen required from strength sports. Instead, they seem to be focused on developing the functional strength and conditioning that boxing demands.

Recently, Hafthor Bjornsson also dropped a physique update. At 6ft-10in tall, Thor has the height and reach advantage on his side. However, his lean and muscular physique hints at improved cardio, speed, and better conditioning overall. A combination of these might present unique challenges for Eddie Hall when they finally meet inside the boxing ring.

“Your eyes are witnessing hard work, sweat, and sacrifices,” Hafthor Bjornsson wrote in the caption to his post.

Eddie Hall and Hafthor Bjornsson have dedicated their life to boxing after retiring from strongman sports. Irrespective of the outcome, it seems certain that the duo will put on a competitive fight to entertain the audience.