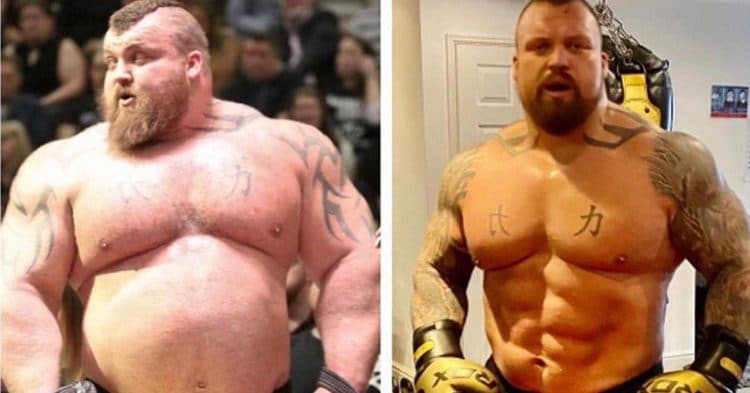 England’s legendary Strongman Eddie Hall is a man with many talents. At this point, there’s probably little left to be scratched off on his bucket list but at the same time, it may never end.

He won the prestigious World’s Strongest Man contest in 2017 and held the all-time deadlift record up until it was eclipsed last year by Hafthor Bjornsson.

“The Beast” as they call him, retired from Strongman competition after his 2017 win but he’s not done competing by any means.

While he’s taken on many challenges outside of strength sports and done well, he’s onto maybe the biggest challenge of his life when he throws down in the boxing ring against enemy Bjornsson later this year and both have been training as if their lives depend on it!

Consequently, both look like a shadow of their former selves with their ripped physiques; that’s definitely going to be advantageous when they’re slinging fists at each other for who knows how long.

Boxing obviously requires a different kind of skillset and level of physical fitness than Strongman and so it’s going to be a spectacle no doubt.

Bjornsson will test his progress against pro boxer Steven Ward in just a few days (January 15th) and this could be a good thing for Hall, who’ll be able to gauge the former’s current skills.

Hall is definitely looking like a real concern for the Icelander as he’s shared some training footage from previous sessions, and it’s evident how much his body has changed.

He recently posted a 3-year before and after transformation comparison on Instagram and it’s quite drastic as he’s gone from 196kg/432 lbs all the way down to 161kg/355 lbs. That’s a 36kg/77 lb weight loss!

Those are some big gains for the former Strongman competitor and although the physique on the left may have been necessary at the time and to accomplish what he has in the sport, the one on the right is no doubt healthier.

His abs are popping and you can clearly see a lot more definition as he’s significantly cut down on the body fat.

And although he will give up a 6-inch height advantage to Bjornsson, there’s no denying athleticism, agility, and quickness will be key, especially when you have two non-professional boxers in the ring.

They both weigh very close to the same weight though which is interesting, but both are still very large men and they’ll need some strength to be able to outlast or outbox the other.

But we’re positive there will be many more physique and overall progress updates from Eddie Hall and Hafthor Bjornsson leading up to the bout scheduled for September.