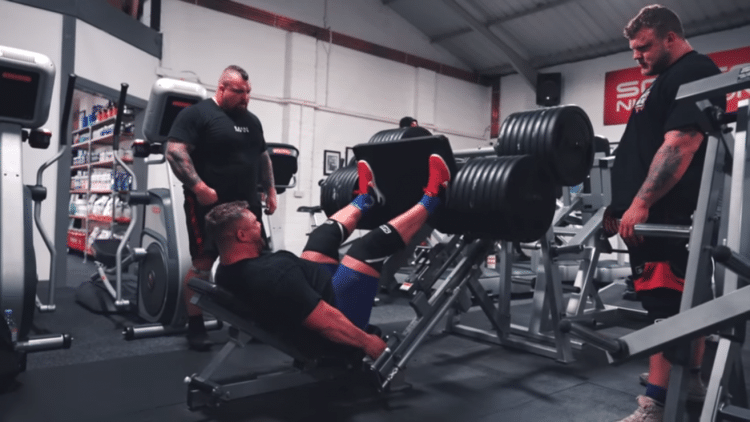 The Stoltman brothers are preparing to compete at the upcoming Britain’s Strongest Man contest. What better way to do that, than by training with the five-time winner of the contest, Eddie Hall?

As a result, Scotland’s Stoltman brothers looked to Eddie Hall for guidance, as they compete in upcoming Britain’s Strongest Man. To be fair, these gentlemen have plenty of their own accomplishments, with the elder of the two, Luke, winning Scotland’s Strongest Man for three years in a row. He only lost that title to his younger brother, Tom, in 2016. They are quite a pair.

Nevertheless, the Stoltman brothers decided to work with Hall to prepare for this big contest. This training was captured on video and uploaded to Eddie’s YouTube channel. Here you can see the trio doing some heavy lifting in the gym, dialing in for the fast-approaching event.

The video shows Hall and the Stoltman brothers doing various exercises throughout the gym. First, they hit some squats, before moving to the leg press, as well as some strongman specific exercises. Not only that, but Eddie offered the pair some advice on making sure they are properly ready for competition.

“It takes two weeks, you know, before you start losing strength and muscle mass,” Hall explained to the men. “So I think if you keep everything firing within fourteen days of the contest, you’re not killing yourself, but you’re keeping everything firing.

Furthermore, Eddie Hall explained the importance of recovery and diet, while telling the men to train at a high speed, while lifting at about 80%. It certainly seemed like the Stoltman brothers got some valuable help out of this session. It will be interesting to see how they look at Britain’s Strongest Man on this Saturday, January 18th.

Blessing Awodibu Looks Like A Monster Ahead Of Arnold Classic Australia