Elliott Sykes has been one of the most intriguing new prospects to breakthrough in the recent years. 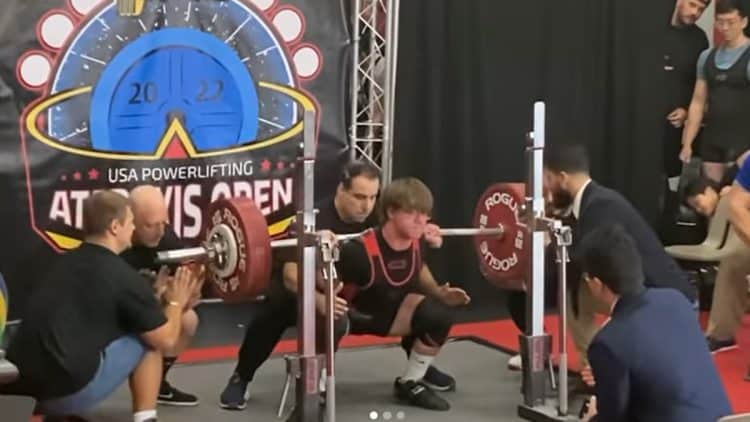 The 2022 USAPL Ataraxis Open took place in Kingston, New York over the weekend of November 5-6, and Elliott Sykes was one of the standout performers. The 16-year-old powerlifter Elliott just had his breakthrough competition, impressing everyone in the community. Elliott won the raw 75-kilogram weight class in the Teen II (16-17 Years Old) age class. In addition, he scored two All-Time World Records.

Elliott Sykes set his first of two All-Time World Records in the squat event having lifted 260 kilograms (573.2 pounds). Competing in the raw division, Sykes was only allowed to use knee sleeves and a lifting belt. The previous record was in possession of Dane Steadman who squatted 242.5 kilograms (534.6 pounds) at the 2015 USPA Boss of Bosses 2.

Elliott Sykes usually competes in the 67.5-kilogram weight class, but he weighed in over that limit for the 2022 USAPL Ataraxis Open. His bodyweight at the time of this competition was 70.9 kilograms (156.3 pounds), which placed him in the under 75-kilogram weight class. Nevertheless, Elliott still managed to set two new World Records.

Elliott Sykes had nine attempts at this powerlifting competition and all of them were successful. So, apart from claiming two World Records, Elliott also bested all of his competition PRs by a large margin.

This was just the fourth competition in which the young Elliott Sykes took part in. However, he has won all four and currently holds a 100% win streak.

Despite being only 16 years old, Elliott Sykes is projected to reach the levels of John Haack, Taylor Atwood, and many others. However, while he has the talent, Elliott will need to continue putting in the hard work and stay injury free for years to become one of the all-time greatest powerlifters.