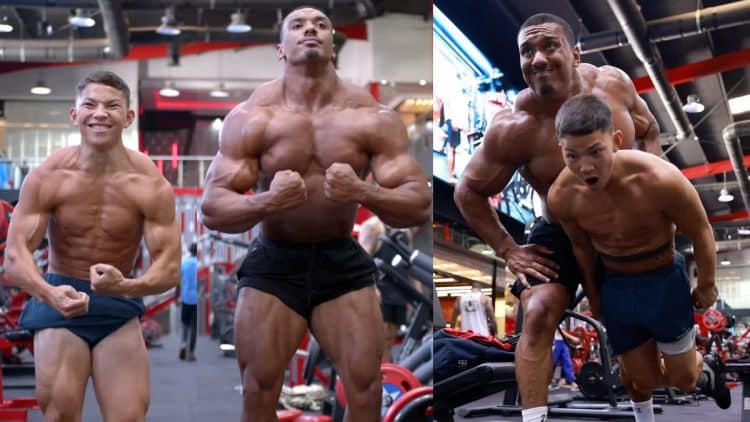 Larry Wheels and Tristyn Lee crossed paths after four years to train together in the gym. Wheels is an American powerlifter, bodybuilder, and arm wrestler. He is best known for wrecking personal powerlifting records in the gym. While his powerlifting achievements are something to marvel at, they have also brought a fair share of injuries for the 27-year-old phenom. Unlike many others in the fitness industry, Wheels has never been shy about admitting that performance-enhancing drugs (PEDs) played a big part in his success. In August of 2022, Larry Wheels decided to stop using PEDs and has switched to Hormone Replacement Therapy (HRT) since.

In recent months, he has opened up about the negative impact of steroids on his overall health and how the effects have been reversed since getting off. Apart from maintaining a strong social media presence, Wheels is also working on improving his arm wrestling skills.

Back in 2019, Larry Wheels joined hands with Tristyn Lee for a chest workout. Nearly four years later, they collaborated once again for an intense back training session in Dubai. Lee is one of the most famous fitness influencers in the world. His training journey started with the goal to help his performance on the soccer field. However, bodybuilding became Lee’s passion and he got obsessed with maintaining a low body fat percentage. Lee shot to fame at merely 15 years of age after displaying his incredibly shredded physique on social media.

However, the 20-year-old has left his ‘calorie-deficit’ lifestyle behind and continues to lead a healthier life. In the past, Lee has collaborated with some of the most elite bodybuilders and fitness influencers like Jay Cutler, Will Tennyson, and Bradley Martyn to name a few.

Wheels and Lee gave a sneak peek into their fitness journeys as they went through the shredded back workout. The video of this session was uploaded on Larry Wheel’s YouTube channel. So without further delay, let’s take a look at the detailed account of this workout.

Larry Wheels and Tristyn Lee go through a back workout

At the beginning of the video, Larry Wheels revealed that the duo planned to train legs together. However, bodybuilding legend Ronnie Coleman convinced him to train back instead and Larry Wheels gladly obliged. This was Tristyn Lee’s third back workout in a week’s time. Therefore, Wheels and Lee both agreed to leave deadlifts for another day and instead focused on some other compound lifts. Wheels also spoke about his life after quitting steroids and said:

“Every aspect of life is just enhanced. I didn’t feel how bad I was until I stopped taking (steroids).”

The vertical pulls are great for building a wide back. However, it is the horizontal pulls/rows that give your back the thickness. Larry Wheels and Tristyn Lee started the back workout with one of the most effective horizontal pull exercises – T-bar rows. While all the rowing exercises deserve a spot in your back training routine, T-bar rows are special in the sense that they are a compound movement that works almost all the pulling muscles in the upper body. The list includes latissimus dorsi, upper trapezius, rhomboids, biceps brachii, and erector spinae.

The duo performed this exercise on the chest-supported machine. Since the chest is pressed against the incline bench of this machine with the help of gravity, the back muscles pull the weight without assistance and momentum. Wheels and Lee did the warm-up sets of this exercise with two 20 lbs plates and followed them up with a few working sets. For the top set, Wheels used wrist wraps while Lee used a lifting belt and wrist wraps. They finished up this exercise with a drop set to focus more on the movement. Wheels did his sets more explosively while Lee took a more measured approach. The 20-year-old performed slow reps and took a few seconds pause between the reps to put the muscles under tension for a longer duration.

Larry Wheels gave an update about his arm wrestling journey. He stated that the forearms are a little sore all the time because of it. However, the biceps pain he experienced during the early days of arm wrestling is no longer bothering him.

The training partners next took to the good ol’ lat pulldown to work the back. It is one of the most famous compound exercises and primarily targets the latissimus dorsi and the upper back muscles.

After performing a few working sets, Tristyn Lee used straps to hold onto the bar in later sets. As you perform heavy sets of an exercise, maintaining the grip starts becoming an issue. Using the straps helps eliminate this problem to get high-quality reps in.

Wheels marveled at Tristyn Lee’s extremely shredded physique and inquired about the diet that enables him to carry extremely low body fat all year long. Lee stated that he prefers to keep his diet simple and has upped the daily caloric intake to 3000 calories from the previous ~1700 calories per day. While the sub-2000 calorie diet helped Lee achieve an incredible 4 percent body fat and gave him an impossibly impressive look, Lee has previously detailed its drawbacks.

Larry Wheels has largely been able to reverse the negative impacts of steroid use since switching to HRT. While his performances may have taken a hit without the pharmaceutical assistance, the new lifestyle is certainly allowing him to lead a far healthier and risk-free life. Nevertheless, he continues to share bodybuilding knowledge and be a source of motivation for millions of people to stay the course in their fitness journey.