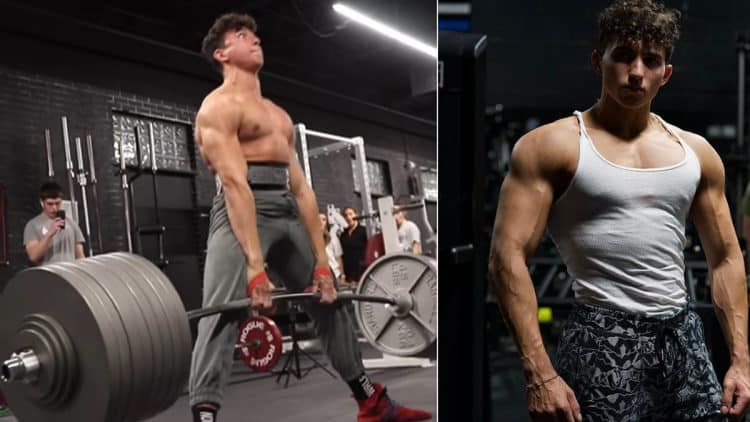 The French Phenom, or ‘The King Of Grind’, Nabil Lahlou, has been on a record-breaking streak recently. It was a long process for him to build momentum, but it culminated recently when Nabil set a 701 pounds (318 kilograms) U67.5KG Raw Deadlift All-Time World Record at the 2022 USPA Good Guys Un-Invitational. Now, just two weeks after that, Nabil put on some lifting straps and tested himself to check what his max deadlift is. He managed to score a new PR by locking out 800 pounds (362.9 kilograms), which he shared to his official Instagram account.

There have been multiple powerlifters that deadlifted 800 pounds (362.9 kilograms), but rarely anyone performed this lift at such a light bodyweight as Nabil Lahlou. Nabil revealed that he weighed in at 163 pounds (73.9 kilograms) at the time of this lift. That means that Nabil’s new PR is 4.9x his bodyweight.

It is important to note that Nabil Lahlou’s recent deadlift would not have counted in a competition because lifting straps are not allowed in powerlifting. However, this proves that he is capable of deadlifting insane amounts of weight. Therefore, as his grip strength improves, he will also be able to lock out the weight.

“800 LBS DEADLIFT PR 🚨 BW: 163 . Went for the first time to @quadstrengthsystem and 800 Finally happened! I wasn’t even supposed to deadlift but as I was feeling the warm ups I knew I had something decent in me. THOSE THAT MAKE ME AS POWERFUL AS AN ANT?”

Apart from the lifting straps, Nabil Lahlou can also be seen utilizing the lifting belt in the video. In addition, he performed the deadlift with a sumo stance as he usually does. Another notable detail is that Nabil compared himself to an ant, because this particular animal is known for its ridiculous bodyweight to strength ratio.

Seeing that Nabil Lahlou last competed two weeks ago, it is highly unlikely that he will appear in another contest any time soon. He has so far taken part in 14 sanctioned powerlifting meets and won 11 of them.

In another Instagram post, Nabil Lahlou stated that he can now lift at least 750 pounds (340.2 kilograms) without the aid of lifting straps. If true, this could be one of the most crucial improvements for him currently. Aside from that, Nabil also stated that he has another goal that he would like to achieve, which is squatting 600 pounds (272.2 kilograms).