Fergus Crawley Runs A Mile In Under 5, Squats 501lb, And Runs A Marathon In One Day! 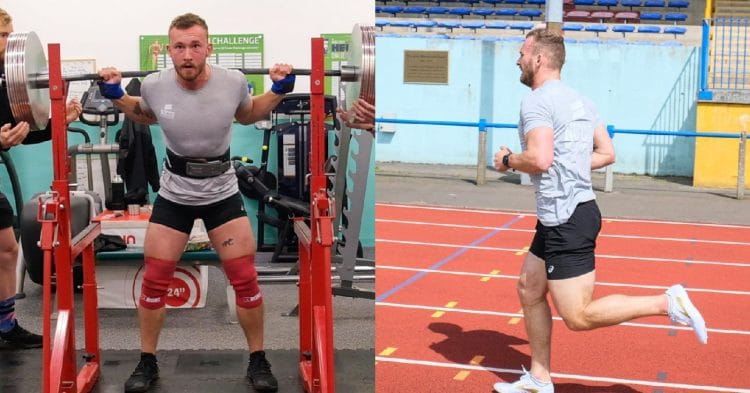 For most people it is hard enough to run a marathon, hit big squat numbers, and run a sub-5 minute mile. Not only did Fergus Crawley do all three of those things, but he did so all in just one day.

Scotland’s Fergus Crawley is an endurance athlete, who has previously competed in powerlifting, as a junior athlete. He made the decision to put all of these skills to the test when he chose to push the limits of his body. The 19-year old took to his YouTube to document a ridiculous physical challenge.

The video that Fergus posted sees him running a mile in under five minutes, doing a 501lb back squat, and running a marathon. These are all feats that are impressive in their own right. However what made Crawley’s efforts even more unbelievable, is the fact that he managed to do all three of these things in just a single day.

The first of these challenges that Fergus completed was the squat, which he was initially worried about doing. However after three warm-up reps, he managed to take that 501lb for a ride, as relief flooded his face. Next up was the 11:30am mile, which he managed to complete in 4:58, keeping a steady pace the whole time. Lastly he did the beastly marathon, beginning at 4:00pm, and running for just over five hours.

The standard marathon typically runs 42.2km (26.2 miles). However Crawley actually ran more than this, going for a solid 43.9km (27.28 miles). The reason for this extra length is because he was originally hoping to do 50km in under five hours, but when he surpassed the five hour mark, he decided to call it quits.

Although Fergus Crawley was unsuccessful in his goal of 50km in under 5 hours, there is no denying that this level of achievement is simply mind blowing. Most people would have a hard time doing any one of those three activities. Nevertheless he managed to channel all of his physical abilities to do all three at once.

Samson Dauda Out Of Tampa Pro Due To Travel Restrictions