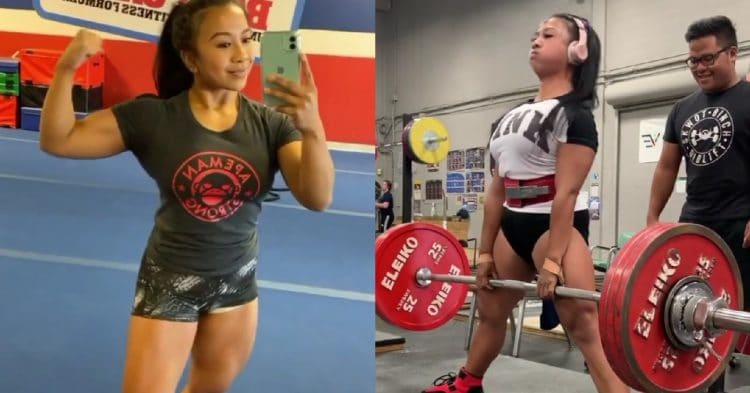 At just 21 years of age, Canadian powerlifter Sherry Berdigan has already begun to make a name for herself. The reason for this recent boom in visibility was evident recently, when she had a pretty solid deadlift training session.

Competing as a junior, in the 57kg division, Berdigan has only been lifting competitively for about a year and a half. In that time, she has been apart of four events, with two of them being at 63kg. However the drop down has clearly worked out for her, as she was able to win the CPU Nationals, earlier this year.

That being said, just because Sherry Berdigan has dropped weight, does not mean she has dropped power. In fact, as her recent post to Instagram showed, it seems like she has actually been leveling up recently. This was displayed by the 402lb deadlift that she pulled, doing so for a top set of a solid four reps.

“402lbs/182.5kgs for my top set of 4 😅 .
.
Supposed to be RPE 8 buuut definitely overshot that last rep 😂 extra juicy lockouts cuz everyone mad that my lockouts were soft last week 😂🙄
Getting stronger but also getting kinda fat LOL so I can’t really be mad about it 🤷🏽‍♀️”

To be honest, Sherry has not had the most impressive showings at the meets that she has competed in, despite her success. Take for example, the aforementioned Nationals, where she went 6/9 on her lifts, but failed to reach a 390lb deadlift. Compare that to the progress she has made, just 4 months later, where she has surpassed that number by 12lb, and doing so for reps. It isn’t just the deads that she has been improving on either, as you can see 341lb squat that she landed a few days later, surpassing her comp best by about 26lb!

The beginning of the career of Sherry Berdigan was not exactly the most impressive seen from a young powerlifting upstart. That being said, she has recently been showing improvements over the last few months, in the gym. As a result, she is developing into a bright prospect, with the growth you would hope to see from someone who is still so early in their career.