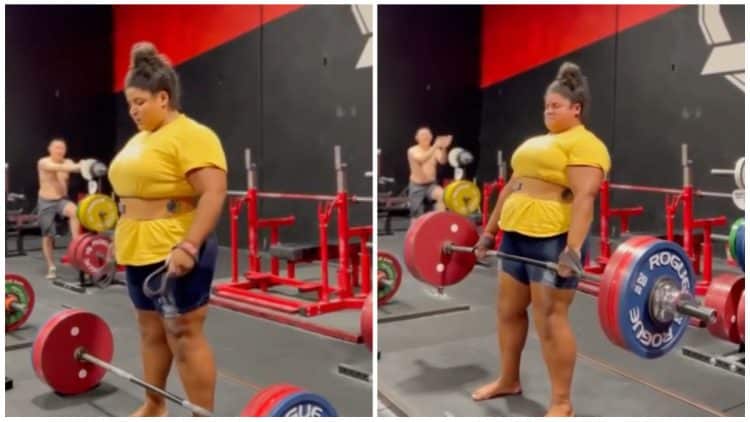 The fifth-ranked world’s strongest woman is looking in phenomenal shape, setting new records in her return to training heavy deadlifts. Her determination was evident on her face before she picked up the bar. She appeared to endure through some tough moments on her way up but managed to crush the deadlift from the floor. Once she had pulled the barbell all the way up, Gabi smiled at her achievement before putting it back down. She only used a lifting belt and lifting straps to complete the lift, and pulled barefoot on the gym floor.

Taking to her Instagram on July 27, Dixson shared a clip of her deadlifting 600-pound (272.2 kilograms) raw.

Gabi was aiming to lift at least 550 pounds going into her training session. She shared that it had been over ten months since she last trained heavy deadlifts. While Dixson may not have intentionally targeted an admission to the exclusive 600-pound club, she joins the likes of Andrea Thompson, Kristin Rhodes, and Becca Swanson, with her training lift.

“When I woke up today, 600lbs wasn’t even on my agenda. I thought maybe I’d chip my old PR & decided I’d be happy with pulling anything over 550lbs since I hadn’t been training heavy deadlifts since November.”

Gabi stated that the lift did not feel as heavy as it actually was.

“However, when @alecjose told me it was time, I trusted him & loaded the bar…

“This is a seriously dope accomplishment for me & I still can’t believe it felt lighter than my last warmup.”

It seems like we’ll get to see more of her going into “Gabi gear.”

“HUGE thank you to Alec for convincing me that I had it in me no sweat, and for my amazing @ironsidetraining family for bringing the hype!

“Also, thanks to @coach_patrickthomas for coining my new favorite term, “Go into Gabi gear” 🤣

“I CAN NOT WAIT TO SEE WHATS NEXT WITH THIS LIFT”

If her latest training footage is any indication, Gabi looks ready to take on her next challenge. Dixson will represent Team USA at the inaugural World’s Strongest Nation Competition with Robert Oberst as the captain. Her addition to the list came after she placed fifth in the 2021 World’s Strongest Woman contest. Although she did not shine in the log lift workout, Dixson dominated her competition in the car walk and deadlift ladder workouts, securing the first position in each. She also competed in the 2022 Beerstone competition back in March, where she came in second place. The event was held in Mission, Texas.

2020 (USPA) Drug Tested Fall Power Classic marked Dixon’s first competitive powerlifting competition, where she totaled 575.5-kilogram (1,268.8-pound) and won gold in the +90-kilogram weight class. Following that she also went on to score first place at both 2021 USPA Drug Tested Nationals and IPL Drug Tested Worlds. Dixson participated in the 90+ Kilogram category at that event.  She has also been crowned the 2020 New Zealand’s Strongest Woman.