Check out who will represent teams UK and USA at the inaugural World’s Strongest Nation Competition. 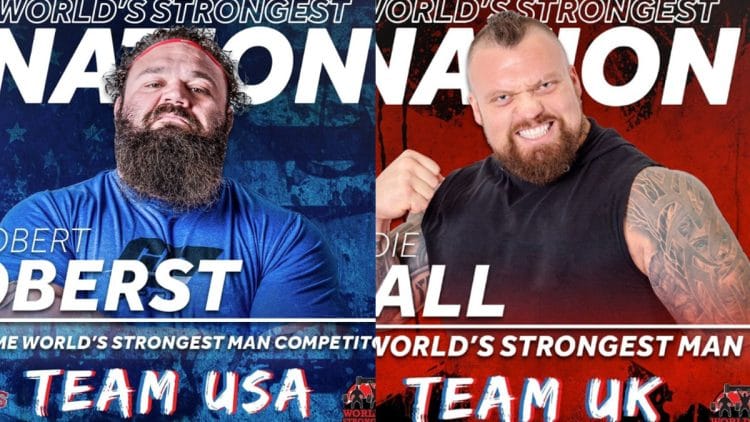 For the first time ever, Giants Live is organizing a competition to find out what nation possesses the greatest Strongman talent. The 2022 World’s Strongest Nation contest is set to take place on November 26, at the M&S Bank Arena, in Liverpool, England. The two nations competing will be Team UK and Team USA.

Robert Oberst will be the captain of Team USA, while Team UK will be led by Eddie Hall, who is coming out of retirement for this special occasion. Over the years, the two men have fought many battles individually, but now they will also need to depend on their teams to defeat one another.

Off the bat, Team UK looks very impressive, and it is hard to imagine a stronger group of people. The 2017 World’s Strongest Man and the first person to deadlift 500 kilograms (1,102.3 pounds), Eddie Hall, looks to be in incredible shape. He will be joined by the reigning two time WSM winner, Tom Stoltman, who seems unbeatable currently.

The 2021 Europe’s Strongest Man, Luke Stoltman, has also accepted the invite and will be a valuable addition. Mark Felix will also be a part of Team UK at the 2022 World’s Strongest Nation, so if there happens to be a grip event, he will secure some massive points.

Gavin Bilton and Adam Bishop will occupy the final two men’s places for Team UK. Gavin is known for his sheer size and a few incredible international performances. Adam Bishop’s prowess, on the other hand, lies in the deadlift event, as his static strength is unfathomable.

The 8x World’s Strongest Man competitor, Robert Oberst, is coming back after battling some injuries. Robert plans to take part in one more WSM competition before he retires, so the 2022 World’s Strongest Nation will be quite a test for him. The energized and versatile Evan ‘T-Rex’ Singleton will join him in this competition. Evan is currently one of the most promising USA Strongmen, as he is very decent in many events

The American Log Lift record holder, Bobby Thompson, and the 2021 Shaw Classic winner, Trey Mitchell, will both represent the USA at the 2022 World’s Strongest Nation.

Kevin Faires will probably be the man to try and rival Mark Felix in the grip event, as the American displayed incredible strength in his Dinnie Stone Replica World Record performance. The World’s Strongest Gay, Rob Kearney, will undoubtebly prove to be one of the main athletes for Team USA as well.

Team USA has secured Inez Carrasquillo, who is arguably one of the greatest up-and-comers in the Strongwoman community currently. In addition, one of the greatest U82KG Strongwomen, Nadia Stowers, will make an appearance for the USA. Gabi Dixon, who came fifth in the 2021 WSW contest, will take up the final place on Team USA’s roster.

Once the events for the 2022 World’s Strongest Nation are released, everything will become more clear. However, just by looking at the lineups, it is evident that the first-ever World’s Strongest nation contest is set to be very entertaining.