Bodybuilder Elgargni weighs in on Derek Lunsford's chances of winning in the Open class at 2022 Olympia: "maybe two or three years and he will be up there 100%" 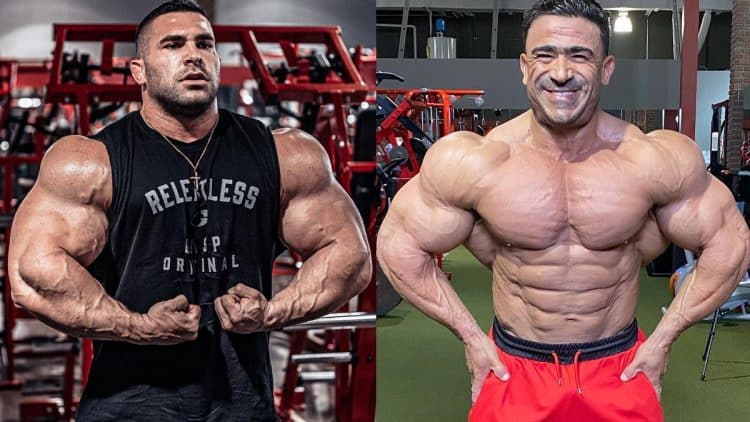 In just a few days, 212 competitor Kamal Elgargni will make his Open class debut at the Tampa Pro. In a recent video, Elgargni discussed his prep and reigning 212 champion Derek Lunsford’s chances of claiming the Open title at 2022 Mr. Olympia.

Last week, Kamal Elgargni dominated headlines after announcing a move to the Men’s Open division. The bodybuilder laid out plans to compete at three events in the Open, starting with the 2022 Tampa Pro, and then the Texas Pro and Ronnie Coleman Classic in the weeks following.

2019 proved to be a breakout year for Elgargni. He defeated 212 standout Derek Lunsford and Shaun Clarida en route to securing his lone Sandow trophy. While Kamal attempted to defend his Olympia title in 2020, Clarida got revenge and walked away victorious. Kamal’s plan for redemption fell short again when he was unable to stop the momentum behind Derek Lunsford, who won his first 212 Olympia title last year.

In preparation for his Open class debut, Elgargni has been training alongside one of the division’s most popular athletes, Nick Walker. From grueling back day sessions to hamstring workouts, the two have become a formidable duo in the gym.

Lunsford, who guest posed next to Walker at the 2022 Pittsburgh Pro, also has his eyes on the Open class. According to his coach Hany Rambod, it’s becoming ‘very difficult’ for Lunsford to lose the weight for 212. Adding fuel to the fire, Olympia President Dan Solomon echoed Rambod’s statement and said, ‘Derek is nowhere near 212’ right now.

As of this writing, it’s unclear if Lunsford will receive a special invitation to compete at this year’s Mr. Olympia in the Open. But if it’s up to Kamal, he believes everyone ‘should have to earn their qualification’ by winning a show. Either way, Kamal intends to turn in a statement-making performance in Tampa in just a few days.

Kamal Elgargni Talks Prep, says He Wants to Compete in the Open at 216-218-Lbs

In a recent video with Ron Harris from the Muscular Development YouTube channel, Elgargni discussed what led to him trying the Open and how training has gone thus far.

I always wanted to do an Open show before the Olympia. The plan is, ‘okay, I had a chat with my family first.’ They said, ‘yeah why not?’ I spoke to my coach, Chris Aceto, he said, ‘yeah, that’s a very good move actually, that’s good thinking.’ Here we go. We announced and we doing it.” Kamal Elgargni told Ron Harris.

Elgargni said he was weighing 223-pounds during the video but plans to trim down to 216-218 by the time he’s on stage in Tampa, Florida.

The 50-year-old said he’s still improving and is excited to do something that’s never been done before at his age.

“It’s going to look great. I’ve packed on all over my body and improved a lot. I’m still improving. I feel really happy coming into this show. It’s not because I want to win or go qualify to the Olympia for the Open, No. This is for me. I want to come to this stage and bring something that’s never been done before, at my age.”

Kamal on Derek Lunsford Winning the Open at Mr. Olympia: He’s Got All the Tools, but I Think He Needs More Time

Kamal believes everyone on the Olympia stage should have to earn their qualification instead of receiving a special invitation from Olympia brass.

“Well, to be honest, for him, if he gets the invite, I think… everybody should earn their win and their qualification but there is some circumstances or there is sometimes you need some special invites if, if as we see, come on Ron. We’ve seen lately with heavyweights; we haven’t seen much quality there. It’s definitely missing some hype. Kamal explained. “We haven’t seen something wow in the last few years.”

Elgargni added that he believes Lunsford can do exceptionally well in the Open but will probably need a few more years to add quality muscle and size to his physique. Additionally, Kamal highlighted business interests like prize money being a larger factor in Men’s Open Olympia contests.

Last year, Lunsford earned $50,000 along with the 212 Olympia crown. The Men’s Open division, however, awarded a staggering $400,000 to champion Mamdouh “Big Ramy” Elssbiay.

“When Derek did Pittsburgh, that guest pose, he fits up really well as you see with social media going crazy and he deserves it. He will be, he’s got all the tools to be a Mr. Olympia. He’s good, but I think he needs more time. To give him an invitation, that’s… I look at that more business-wise. What’s Derek going to make? What’s Derek going to do? I think it’s too early to give it to him because he’s won only one time in Mr. Olympia in the 212.”

Should Lunsford end up back at 212 Olympia this year, Elgargni believes he could lose his title.

“I would love him to do the Open because if he’s going to do the 212 again, maybe he loses his title. Believe me, because we are not a joke here. I train my ass off.” Kamal explained. “If you’re not 100% they aren’t going to look at you [Derek Lunsford]. I think if he decides to do it, that’s whatever. It’s not me. If they gave it to him, he deserves it, 100%.”

Plenty of notable bodybuilders agree that Lunsford could do quite well in the Open. In fact, “The Mutant” said a few weeks ago that Derek could beat him, but ‘not this year.’ He added that he doesn’t think Derek has the size to overpower the top Olympia contenders in December.

Bodybuilding veteran and 1983 Mr. Olympia Samir Bannout questioned the safety of Kamal’s recent move to the Open. He says older bodybuilders, like Kamal, need to steer clear of ‘certain androgens’ and believes it will be difficult for Elgargni to keep improving at the age of 50.

Elgargni is laser-focused on his own Men’s Open venture, but he made it clear that all athletes should have to earn qualifications rather than being offered special invitations. With Kamal Elgargni and Lunsford eying the Open division, 2022 Mr. Olympia is expected to be full of surprises.