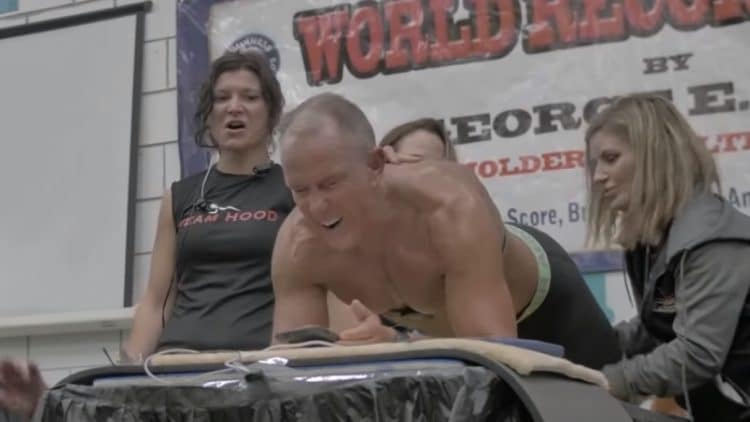 George Hood is not your average 62 year old man. This veteran of the United States Marines recently found his place in the Guinness Book of World Records, by planking over 8 hours!

This was not the first time that Hood held the record for the longest amount of time in the front plank position. In 2011, he managed to set this record at a strong 1 hour and 20 minutes. He would try to extend this record in 2016, but would end up losing to China’s Mao Weidong, at 8 hours, 1 minute, and 1 second.

Since that moment, Hood was determined to get the record back. He trained for 18 months, an average of 7 hours a day, with 4-5 hours straight of planking. Moreover, he throws in 700 push-ups a day, as well as 20 sets of 100 sit-ups, with arm curls and squats too.. All of this training led the Naperville, Illinois native to what is expected to be his final attempt at the world record.

When George Hood assumed the planking position on February 15th, he had one goal in mind: break that world record. With metal music blaring, and his coach by his side, he set out on this journey. Then, 8 hours, 15 minutes, and 15 seconds later, the world record was his once more. Oh, and if this was not enough, he decided to cap things off with a quick set of 75 push-ups.

Check out this video of the amazing performance:

“Anybody can do what I do,” Hood said. “Everybody has to start somewhere,. Every tree that’s planted has roots.

Once that tree is planted and those roots start to grow, whether it be 30 seconds or a minute or 5 minutes or an hour (of holding a plank), you start repeating the process and taking care of your tree, it will grow and you will improve and you will actually get better.”

This is simply an amazing feat of both physical and mental toughness. But what motivated Hood to attempt this record again? Well, as he explained in a recent interview with CNN, it is to show people that anything is possible and that they can overcome whatever mental blocks they have in their life.

George Hood is certainly a massive inspiration, and this was a huge accomplishment. Congratulations to him on his world record plank.

The plank is a popular exercise. As well as being an excellent general abs strengthener, it also teaches you how...

The front plank is arguably one of the most popular abs exercises around. Planks are an isometric exercise, which means...

We’re all familiar and then some with the plank exercise. With the recent resurgence of the traditional plank many variations...

The word inspiring just doesn't seem to cut it. This is what many are feeling when they watch 95-year-old Johanna...