Giancarlo Stanton Gets Fun Workout In With Adriana Lima 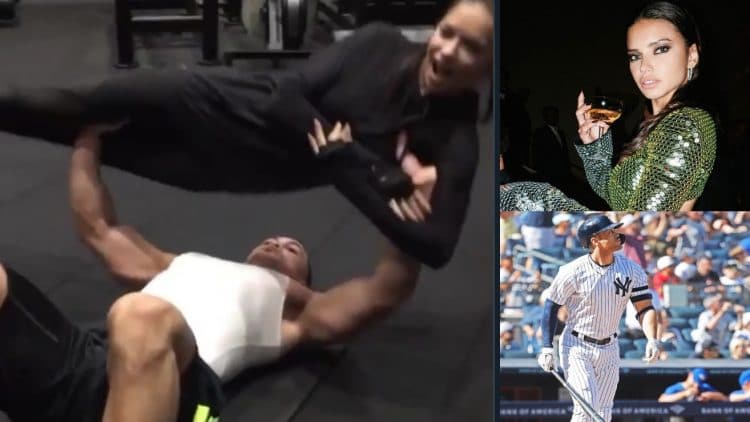 Giancarlo Stanton is a beast of a man, especially for an MLB player. He put that size on display recently, bench pressing Victoria Secret model Adriana Lima.

Stanton has proven to be an absolute monster in his tenure as Yankee’s outfielder. He is also their designated hitter, which is a position he earned fairly, through possessing unreal power that he uncorks on the plate. At 6’6 and 245lb, this behemoth has managed to earn 308 home runs in his career thus far, making him a feared player every time he picks up a bat.

Stanton put his insane strength to the test preparing for the 2020 season. A recent Twitter post gave a glimpse of some of that unorthodox with he has been doing. In particular, he is seen here bench pressing Brazilian supermodel Adriana Lima.

Me, in New York: Constantly freezing, skin is red and dry from cold, only eating delivery.

Giancarlo Stanton manages to hit four reps of lifting Lima before the video stops, honestly looking like he could keep going. Lima is likely not particularly heavy, but as we have seen before, lifting humans can be a bit awkward to do at times. Therefore to see him manage to do so for four reps, while making it seem effortless, just goes to show what kind of a special athlete he is.

Stanton will almost certainly be taking part in the first game of the Yankee’s spring training, happening on February 22nd. Moreover their first official game of the season takes place on March 26th, against the Orioles. Thanks to this work with Adriana Lima, he is sure to be prepared and ready for action when the time comes.

Giancarlo Stanton is one of the best baseballs in the world. It is unclear how much benefit he actually got from doing this with Lima. Either way, it was certainly a blast to see these celebrities engage in such lighthearted activities.