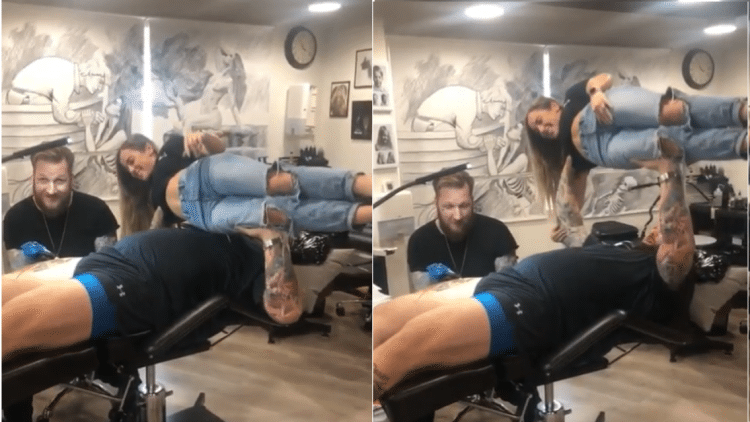 Well, it’s official: Thor Bjornsson is cooler than you, me, and just about everybody on planet Earth.

2018 World’s Strongest Man Thor Bjornsson is lot of things. Obviously, he is one of the strongest people in the world. However, he is also “The Mountain” on HBO’s Game of Thrones. Moreover, he has transcended the typical reach of strongmen, and gained a level of mainstream popularity both in and out of the fitness world.

Nevertheless, none of that means anything compared to his most recent accomplishment. Bjornsson recently decided it was time to get another tattoo, this time on his leg. However, he decided that he could not afford to miss the training time, so he would have to improvise a workout in the tattoo shop.

Naturally he used the best thing he could find – his wife! In this video, you can see Thor Bjornsson bench pressing his wife for four reps. All the while, the smiling tattoo artist just keeps working.

Thor’s wife, Kelsey Henson seems entertained by the whole ordeal. Additionally, the tattoo artist seems to be in good spirits about the entire thing. Hopefully Bjornsson did not mess up his tattoo. As he explained in an earlier post, this is a continuation of a piece he started on his leg about a year ago.

Granted, this is nowhere near the most impressive feat of strength that Bjornsson has demonstrated. He was recently seen winning his ninth consecutive strongman title in Iceland. Additionally, he the first person to have won the Arnold Strongman Classic, Europe’s Strongest Man and World’s Strongest Man in the same calendar year.

Physically impressive or not, this is still an incredible entertaining exchange from Thor Bjornsson. It will be cool to see what he got tattooed on his leg.