Closed Gold's Gym In Venice Is Being Overwhelmed By Homeless Citizens 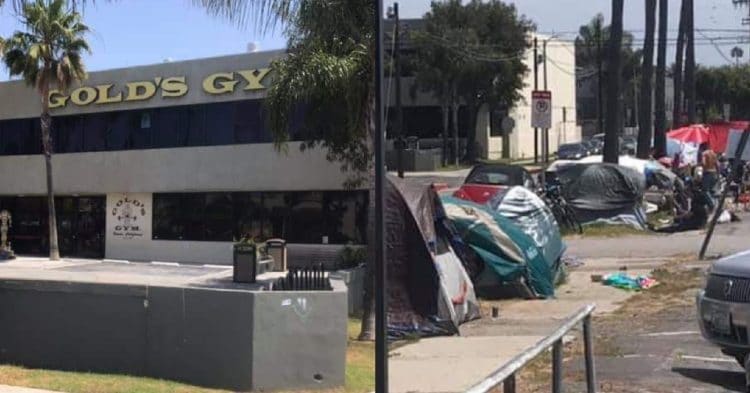 In the strength sports world, Gold’s Gym is traditionally thought of as some of the best facilities to train in. However a troubling picture has been painted outside the gym in Venice, California showing that this particular location is not in the best shape right now.

There can be no overstating how much of an impact the current global health crisis has had on the sports world generally, as well as gyms. Gold’s Gym was already struggling before this incident began taking place. Yet it is undeniable that having to shut down their facilities right now has been detrimental to their brand.

The true extent of this damage is beginning to unfold on the west coast, as Gold’s Gym Venice has begun to take on some long-term guests. Uploads to photographer Bill Comstock’s Facebook page has painted a pretty disheartening image of what is happening at this facility. The photos speak for themselves, but they show how homeless men and women have begun to set up camp in the parking lot and sidewalks outside of this massive location, taking advantage of it being empty.

On my way back from the pharmacy, I snapped a few pics of Golds Gym Venice on my iPhone . Not pretty pictures 

This is quite a troubling sight, to say the least. Many people have commented, noting the overwhelming filth and smell of human excrement in the streets outside the gym. Unfortunately it seems that this location has been on the decline for some time. In fact, bodybuilding legend Flex Wheeler posted in the comments that he had heard how bad things were, but that this took it to a new level.

“I was told by my close friends Who still train at Gold’s Gym Venice, how bad it was over five years ago.

But I actually never seen photos. it’s like out of some fictional horror movie.

Humanity is dead, people have just lost all commonsense of helping one another.

I can’t believe there’s so many millions and billionaires in California alone that would even allow this to happen.

If I was that wealthy I wouldn’t be able to live with myself if I knew of such living conditions💔 all a rock throw away from one of the biggest global companies.

There are a lot of comments saying how the recent situation in the world caused this demise. However others have noted that this situation was bad long before gyms were forced to close nationwide. Regardless there can be no denying that the situation at Gold’s Gym Venice is dire, to put it mildly.