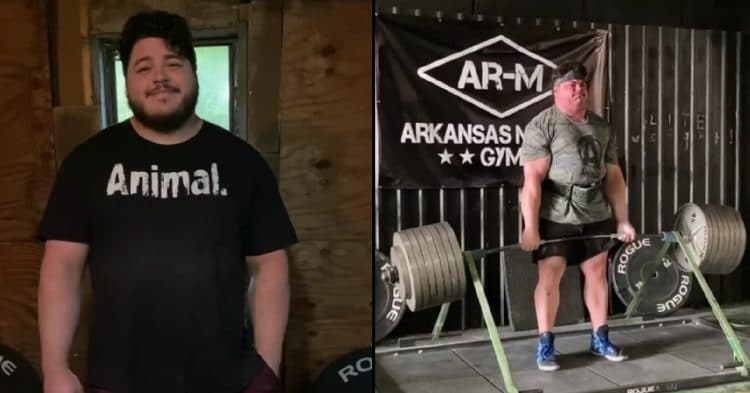 Doing deadlifts with resistance bands is a growing trend in the community. However Logan Chapman took things up a notch, by turning in some massive numbers recently.

At just 25 years of age, Arkansas’s own Logan Chapman has already begun to make a name for himself in the powerlifting circuits. He has not had the most amount of appearances, largely competing in regional events. However he started turlning heads last year, at the Kern US Open, when he scored second place in the +140kg weight division.

The aspect of Logan’s game that has stood out the most, so far, is his deadlift skills. He has already been able to pull 880lb in competition, but he recently pushed past that in training. A recent post to his Instagram shows the young lifter hitting a 725lb deadlift, using reverse bands. Although the exact amount of addition that the bands provide is hard to pinpoint, he approximates that it is adding around 200lb to the pull, which would make it roughly the equivalent of deadlifting 925lb.

“725lbs of straight weight with approximately 200lbs of band so some where in the low 920lbs rang. Super happy about this and a big PR!”

It has been more than just the deadlift that Logan Chapman has been working on lately. Here he is, just a few days earlier, doing some squat work with chains. He says he had 635lb on the bar, with 100lb chains, making for a string 735lb squat, which he manages to hit quite smoothly.

Logan Chapman is yet another member of the growing list of exciting young powerlifters, who seem ready to do big things in the sport. He still has a long way to go before he can do it, but these types of numbers in the gym seem to imply that he could eventually contend for some pretty big records. Time will tell exactly how far he can take his career.