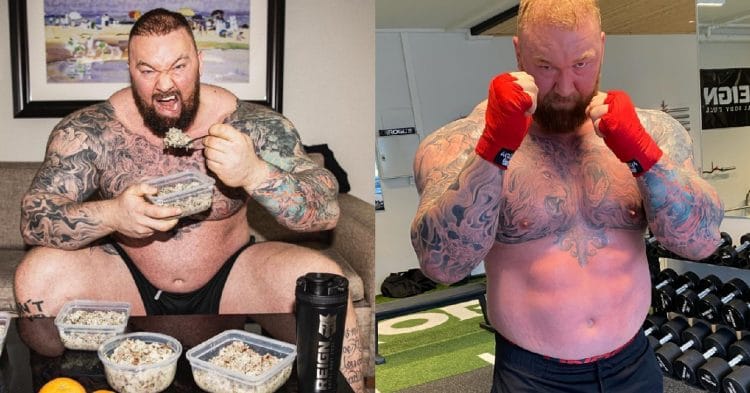 Even though his fight with Eddie Hall is still over a year away, Hafthor Bjornsson has been training hard to prepare for the bout. As he showed recently, this has left him with a good amount of weight loss, as he has started looking trimmer.

The sports world has been buzzing ever since it was announced that Hall and Bjornsson would be taking their beef to the boxing ring. Even though the fight will not be taking place until July 2021, that has done nothing to hamper the enthusiasm and excitement throughout the fanbase. If anything, the anticipation has become palpable, as various members of the community have voiced their opinions on the bout.

This anticipation seems to be warranted, as both men seem to be taking their training seriously. Hafthor Bjornsson has posted a ton of training videos, showing his boxing skills. Now a recent update to his Instagram shows that the Icelandic strongman is looking noticeably slimmer, saying that he has lost 18kg (39.6lb) since he started this training.

There is still plenty of room to go, but Thor is clearly much more cut than he normally is. You can see his abs peaking through, and he looks to be in decent shape. While he does not outright say it, you have to wonder if there is some sort of subliminal jab to Eddie Hall, who recently showed off his own weight loss.

Either way, it is clear that both Hafthor Bjornsson and Eddie Hall are serious about this fight. On the other her hand, there is still about 14 months before the fight. So who knows how much this motivation will keep up, between now and then. Hopefully neither man gets burned out, and we can have a competitive match between the two.