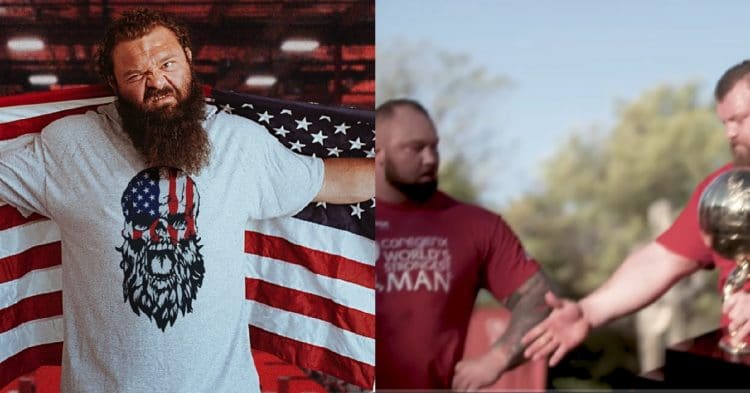 Recent video footage reopened the controversy that occured at the 2017 World’s Strongest Man, between Hafthor Bjornsson and Eddie Hall. Now fellow strongman Robert Oberst speaks out on the situation, and gives his thoughts.

The story goes that in 2017, while doing the Viking Press, Bjornsson was docked a point for “double dipping”: a penalty where an athlete bends their knees a second time while catching the weight of the press. This point ended up making the difference, as Hall would win the title that year. From that point on, Bjornsson was vocal that he felt Eddie cheated, and that he was the reason Thor did not win the contest.

This has soured Eddie Hall’s win, and affected his legacy as a strongman, even to this day. Therefore, ahead of their scheduled boxing match, unseen footage from that contest was released, which painted a different picture of the situation. It showed Hafthor being warned by the referee before the competition, to be careful of double dipping, being used as a specific example because of the way he tends to do the lift. Furthermore, the video shows the ref cam footage, where you can clearly see that, not only did Bjornsson double dip, but he even dropped his weight before the down signal from the ref, something he was not penalized for.

Following the revelation of this footage, Robert Oberst has decided to speak out on the matter. He took to his YouTube channel to address the controversy and share his opinion. While he tries to keep things civil, it is clear that he feels it was Hafthor’s responsibility to pay attention to his technique on a lift that he often struggles with.

When we go into a squat, I do pay attention to those things. When we deadlift I make sure our depth is exactly where we both agree, all that kind of stuff. So I’m very familiar with the bone yard and the process that happens when you’re preparing the week before the World’s Strongest Man, and actually at the event.”

Robert Oberst explains that when it comes to lifts that your technique is uncertain, it is important to pay extra attention to your form, which Thor did not do. However he wants to make it clear that he does not hold anything against the Icelandic champion.

“I don’t mean anything disrespectful to Thor from this video. I don’t think he’s a bad person or anything, I think he fought his ass off. He was having a hard time already, he had the Bell’s Palsy that he was dealing with, he had a ton of issues with his home life, and he fought and came within one point of winning World’s Strongest Man.

It hurt him. It didn’t break him, but it momentarily crushed him. When that happens you say a bunch of emotional stuff, because you’re so invested. There’s no room to be cool when you’re 100% invested in competition. If I’m ready to die for this, and I don’t get it, I don’t care if I look stupid complaining afterwards. I was ready to die for that.”

Robert Oberst concludes by explaining that both Eddie Hall and Hafthor Bjornsson have grown and matured since that situation. He feels that this situation should not change the perception of either man, and that they both deserve respect. Moreover he congratulates both men on being successful enough to get interest about their boxing match.

What are your thoughts on the beef between these two strongman competitors?

10 Home Workouts You Can Do With Single Dumbbell Or Kettlebell