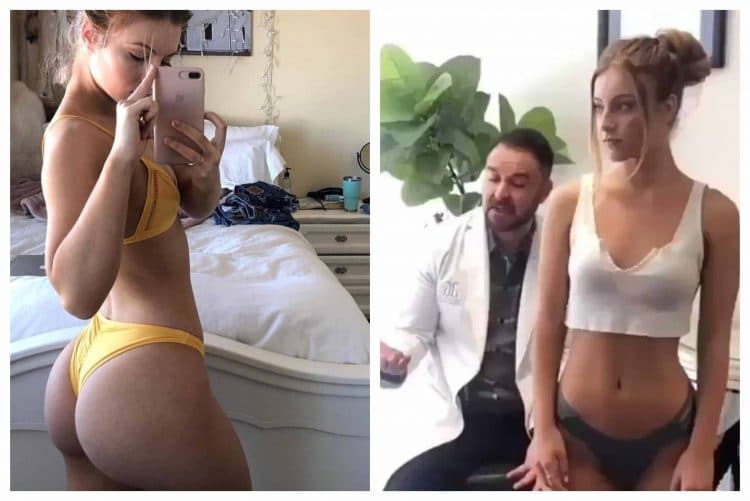 Since lately, I’ve been writing primarily about huge sweaty dudes lifting heavy shit, I thought it would be refreshing to address some more important subjects. One such subject is a young Instagram/fitness model named Daisy Keech, that went out of her way to prove her insta-famous glutes are as real as real gets.

She, like many other good looking girls over the age of 18, started posting pictures of her amazing behind on the interwebz and of course, along with the thirsty dudes came the skeptical hippos claiming her ass is either surgically or technologically edited.

However, what separates Daisy from other internet famous girls is that Daisy called the bluff of various trolls and haters and went out of her way to prove her money maker was never tampered with. Her method of choosing was via a plastic surgeon, who probably, on that day, had the easiest workday in the office ever.

“Her buttocks has a lot of firmness to it … good volume,” he says. “I don’t see any skin changes that means she’s had anything artificial injected. I don’t see any little incisions that point to fat transfer”

As you can see the good doctor is really struggling to sound scientific and all but what he’s really saying basically translates to; “she has a banging ass, totally would hit if given the chance…don’t even care if real or not….but yeah, it’s real and it’s glorious”.

Daisy’s happy story doesn’t have an entirely happy ending, because after all…she’s a fitness model on the internet. After getting a surgeon’s approval on her ass, Daisy quickly announced that she will be getting a boob job.

Which shouldn’t be an issue, girls do this all the time. I personally am not a fan of surgically upgraded bewbs, Butt to each their own, I guess. Guys take massive amounts of roids just so girls would talk to them or so they could get a confidence boost.

Why couldn’t girls go get something to boost their confidence? Anyhow, this is relevant because the internet had zero mercy towards Miss Daisy when she happily announced she will be getting a permanent boob pump up.  The comment section lit up faster than you can say “boob job” and started attacking her for being honest about her surgery and threatening to stop following her and insulting her. Which is the internet influencer equivalent of breaking up with your girlfriend/boyfriend.

This all just to show, that you can’t please the internet. There will always be something people don’t like about you, so next time someone starts talking smack at you on the internet, take a deep breath, put a smile on your face and tell the annoying hater to go fornicate himself.