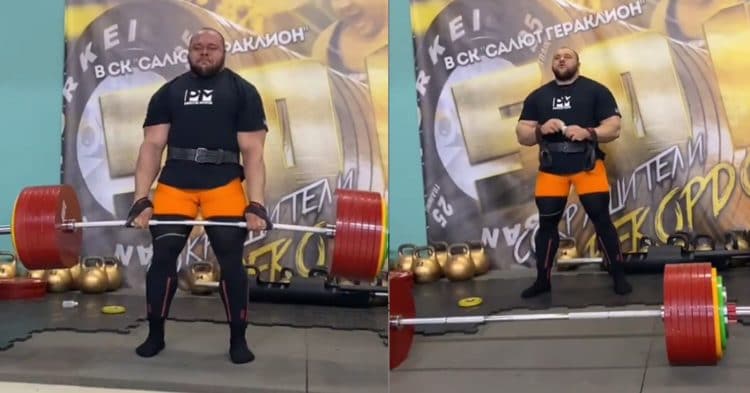 Things just got a lot more interesting for the August 14th Giants Live deadlift challenge event. Russia’s deadlift specialist and former circus Strongman, Ivan Makarov, has officially been invited to participate in the Giants Live deadlift challenge.  Ivan has been gunning for the deadlift world record for quite some time now. Back when the world wasn’t locked up and super depressing and stuff, Ivan attempted to deadlift 501kg but couldn’t quite get the lockout and ultimately failed to get the record.

However, that didn’t stop him from trying again. He went back home, trained his ass off, and about six months ago tried again to break the world record. The result, pretty much the same as the first time, unfortunately. Ivan is a great puller and has world record numbers in him but he just can’t seem to get the damn bar past his knees. He has pulled as much as 550kg from blocks and has pulled up to 480kg on a regular deadlift but everything above the 480/490 range seems to give him significant issues.

This time, Ivan coming to the big stage, Giants Live. The top Strongman promotion in the world that runs WSM, ESM, and various other smaller “Strongest Man” variations, took note of his strength and deadlifting proves and decided to give him the chance to shock the world.

Ivan has already hit the ground running and as the title of the article suggests, he plans on going guns blazing on August 14th. A bit less than 4 months away, Ivan is pulling 430kg for a double-RAW. Yes, you read that right, he isn’t wearing a deadlift suit. He has figure-eight straps and a belt but no specialized deadlift suit. Okay, he is also fueled by the epicness of Manowar’s “Warriors of the World” which has been proven to add at least 50 lbs to your lift by bro-scientists around the world.

I would also like to mention that each time he has attempted a world record, the record got raised. The first time he attempted 501, Eddie Hall was still the baddest dude in Strongman with his historic 500 kg deadlift. Then along came a Frost Giant from Iceland and set the record at 501 kg. This meant if Ivan wanted to be called the best damn deadlifter in the world, he had to go for 502 kg. Now, Giants Live decided to “spice things up” a bit with a 505 kg challenge and a prize reward of $50k dollars. Which, means…unluckily for Ivan…the bar has been set even further and it now stands at 505 kg.

However, I think everyone will agree that deadlifting anything above 500 kg or even equalling Thor’s 501 kg will be nothing short of amazing and record-worthy.  Especially when taken into consideration that a lot of guys are gunning for that magical, mystical 500 kg deadlift.