17-yo Powerlifter Jackson Powell Breaks 4 National Records At One Meet! 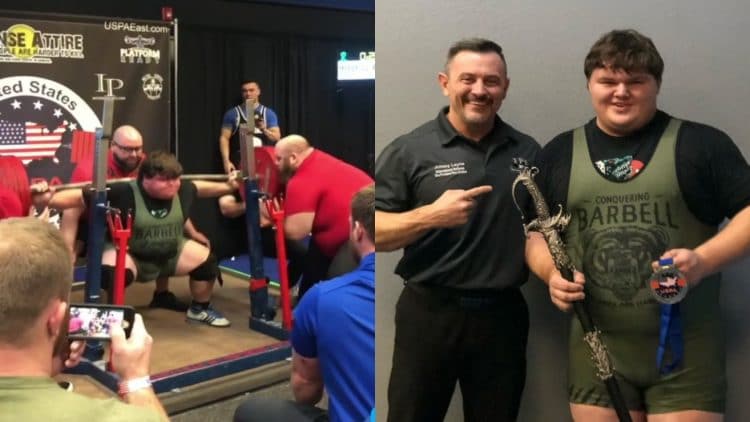 Jackson Powell may be a junior in high school, but he is already putting his name in history books. He did so with a bang, setting four records at one meet.

Jackson Powell is a 17-year-old junior at Baylor school. He began powerlifting in the seventh grade, starting off with just typical weightlifting. For a solid chunk of time, he has been referred to as perhaps the strongest teenager in the world.

Powell was looking to prove that beyond a shadow of a doubt when he took the podium recently. He competed at a powerlifting meet over the weekend, and he wanted to make a statement. That absolutely came to fruition, as he managed to break national records with all three of his lifts, and with his total. It was a truly phenomenal display.

“To say that I am happy would be an understatement,” Powell said in the post. “Today was a phenomenal day with a roughly 832 pound squat, 380 pound bench, and a 644 pound deadlift. Totaled out today with a rough 1856 pound total. I broke every national record in the USPA for my age and weight.

I would never have been able to do it without my main sponsor @cdgriff4 would also like to thank @conquertheweights @zonesmellingsalts for backing me through everything. Also big thank you to @the_walls_of_jericho_training for helping me today.”

Check out videos of his lifts:

When it came to the squat, Jackson Powell crushed it at a whopping 832lb. Subsequently, he followed that up with a strong 380lb bench press. Following that, he made a 644lb deadlift look rather easy. As a result, he copped a total of 1856lb, to round out his string of four records being broken.

Jackson Powell continues to be one of the most impressive young powerlifters in the country. With performances like this, there is no telling what the ceiling could be for this young man.