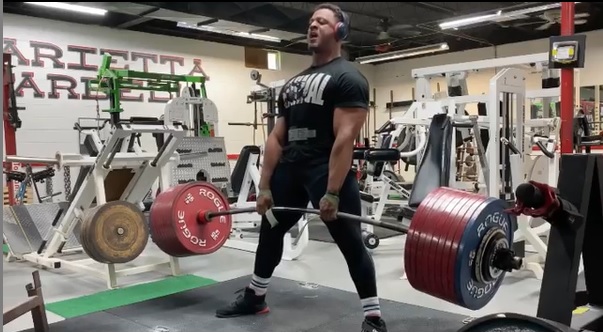 Jamal Browner is a 26 year old powerlifter with loads of potential. He has been competing since 2016 and the lowest he has ever placed is the fifth place. So, yeah…this dude is going places. Recently he posted a gym deadlift video in which he is pulling(sumo) a mind-numbing 476kg. Now I know the internet powerlifters and deadlift “purists” alike are currently triggered because he didn’t do it with a regular stance and he went sumo.  Which is fine, to each their own, but this is still very impressive. You also need to take account that the last time he competed, back in February, his best deadlift was “only” 971.1lbs/440kg. So this would mean, that since February he has increased his already impressive deadlift by nearly 40kg.

At this rate, he has a very, VERY realistic chance of being the third man to ever deadlift +500kg and maybe even be the first guy to pull it RAW! Remember both Thor and Eddie did their world record deadlifts with a special deadlift suit on. Now I know that the internet isn’t all that fond of sumo style deadlifts and some guys(or gals…trolling isn’t exclusive to men) will even go as far as saying that this “doesn’t count” because “Sumo is cheating” but regardless of leverage advantages of pulling sumo this is still very impressive. Powerlifting experts correct me on this one if I’m wrong,  but I do believe this is the heaviest deadlift ever done raw and by a none 400lbs human.  Also, should he repeat this lift in a competition it could officially become the biggest deadlift performed in a powerlifting meet by someone who doesn’t weigh as much as a full-grown grizzly bear.

Nick from “Nick’s Strength and Power” channel speculates that this lift should be more than enough to qualify him for the deadlift championships in September. I would disagree with this, because of two things. 1. Strongman isn’t the same as Powerlifting and I’m guessing he has his sights set on future powerlifting competitions and 2. Despite this being a green light worthy lift, it’s still sumo and that’s a big “no-no” in Strongman competitions.