The 72kg/158lb competitor put up a big AMRAP pr surpassing her previous attempt by 6 reps! 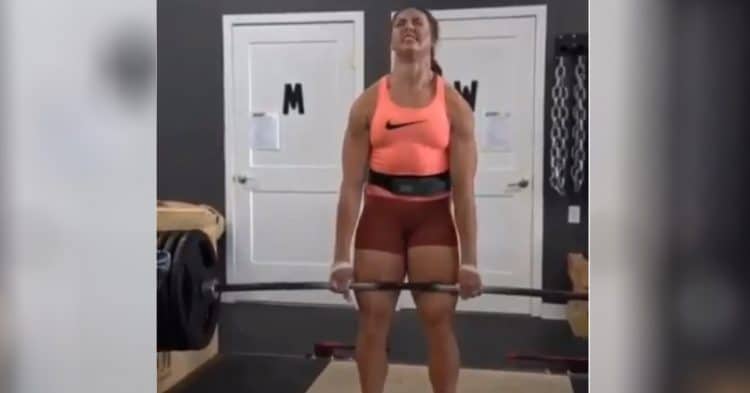 Canadian powerlifter Jessica Buettner is an absolute savage when it comes to pulling big poundages off the floor. In early July, the 2019 IPF World Championships silver medalist deadlifted 230kg/507lbs in her living room and several weeks later, she does an AMRAP (as many reps as possible) set of 405lbs x 20 reps which is super impressive.

Read more: Jessica Buettner Tells What It Takes To Be An Elite Powerlifter With Type 1 Diabetes (Exclusive)

This lift was done with straps and Buettner explained in the post that she attempted this same 405lb deadlift in November but only completed 14 reps. This could definitely be attributed to the support she had of which she also acknowledged.

Here’s what she wrote on Instagram to accompany the video…

Touch and go, with a deadlift bar and straps, but as a natural, drug tested powerlifter I am pretty damn proud of this set!! I tried this in November and got 14 reps, but the @risestrengthlab
hype squad was what probably pushed me for the extra 6 😂❤

But was this enough to beat @travyjsmith
repping 675lbs/7plates?! Was an epic deadlift day for both of u“

Check out the AMRAP set…

Buettner suffers from diabetes so she has to ensure her blood sugar levels are stable before going into a lift as taxing as this one. But she pulled it off (pun intended) although it definitely wasn’t easy coming down to the last few reps.

But this AMRAP set showed that she’s progressing pretty well and there’s definitely more to come from the 25-year-old junior world record-holding powerlifter.