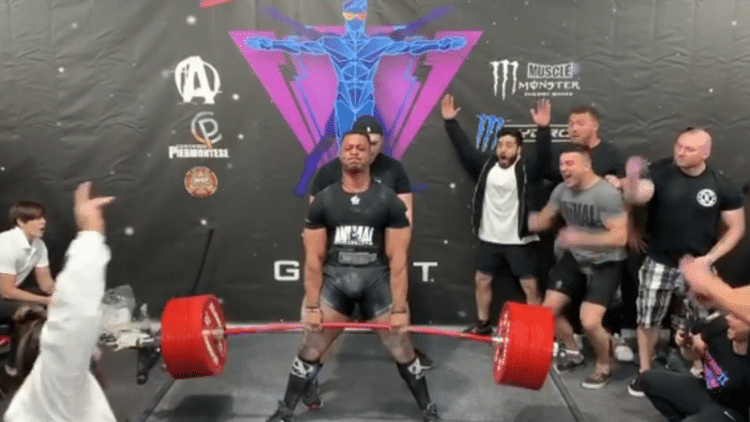 The Hybrid Showdown II powerlifting meet over the weekend was the place to be, if you want to see records broken. Browner competed alongside longtime competitors like Kevin Oak and Stefi Cohen, who blew the crowd away with their lifts. Therefore, it was easy for him to hype himself up, when it came time for him to perform.

Browner is known for being able to smash through massive deadlifts, and this event was no different. When he was finished competing he would walk away with a humongous 953.5lb deadlift, as well as a 771.6lb squat, and 457.4lb bench, to amass a strong 2182.5lb total. Not only was this enough to secure him first place in the 242lb division, but it was also enough to earn him a new all-time world record for his total lift.

However, Jamal Browner was not finished there. Although it would not count towards his total, he wanted to attempt a new world record deadlift, with a fourth try. He did just that, hitting a whopping 971lb, just barely beating the previous record of 970lb.

Check out a video of the incredible lift:

It is incredible to see the ease with which Browner just blasts through that lift. He makes it seem like a warm-up, instead of breaking a world record. Even though he said this was also a personal best for him, it seems like a certainty that he will end up crushing this record too, the next time he competes.

In addition to that, Browner posted the videos of the rest of his lifts.

At just 25 years old, Jamal Browner is really establishing himself as one of the best in the world right now. His growth from here will be fascinating to see, especially with showings like that.