Jay Cutler Shares His Most Intense Garage At Home Workout Ever! 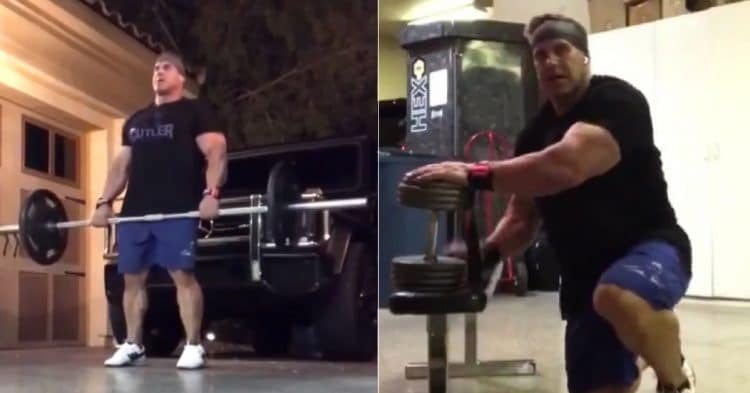 Home workouts are all the rage right now, with most people being unable to access the gym. Jay Cutler decided to join in on the fun, by sharing his own intense workout you can do from home.

Cutler is something of a bodybuilding legend, having competed since the 90’s. In that time, he managed to win the Mr. Olympia title an impressive four times. He had a phenomenal career as a competitor, to say the least. Not only that, but since then he has gone on to become a bit of an ambassador for the sport, filling roles in media, and even having a contest in his namesake.

With that being said, there are a ton of people who look up to Jay Cutler. These people have been wanting to know what he is doing, in order to stay fit and busy, while being stuck at home. Therefore he decided to take to Instagram, where he shared a home workout plan from his garage, that is enough to make anyone sweat.

In the clips, Cutler can be seen doing a variety of different exercises. He moves from barbell rows, to single arm dumbbell rows. He even throws in some pull-ups with resistance bands, and lying hammer curls for good measure. All things considered, while it does require a bit of equipment to do, this workout will definitely give you the most out of what equipment you do have.

Obviously it goes without saying that these times are difficult for basically everyone. Most of us have bigger things on our minds than going to the gym. Nevertheless it is still important to focus on your physical fitness, perhaps now more than ever. So hopefully this home workout routine from Jay Cutler will be enough to motivate you to find your own fitness plan.