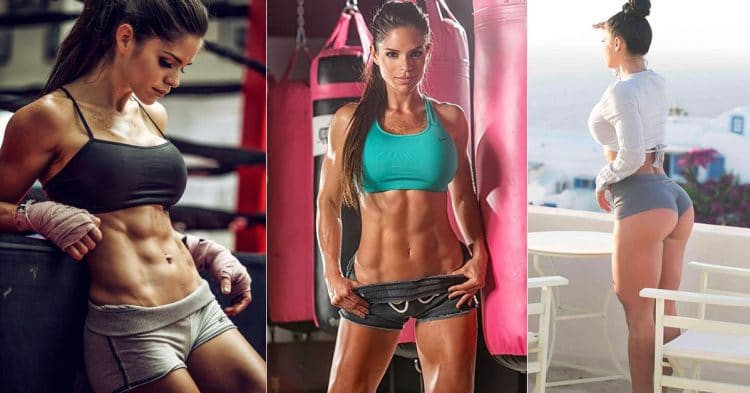 Michelle Lewin is a fitness model and bodybuilder who achieved international fame in record time. This is her complete profile, biographies, training regimens, diet plan, and more.

From an average girl to being a successful, glamorous model at an early age, Michelle Lewin realized that there is much more beyond the ramp walk to be achieved. The surprising success empowered her to fully take advantage of her realized potential. And it wasn’t long before she stepped into the gym to make herself fit, and be more active. As a result, she went from just a model to a social media star in no time.

Let’s have a look at Michelle Lewin’s athletic statistics…

Michelle Lewin was born in Maracay, Venezuela. She worked in a local clinic for years. Lewin moved to the US in 2012 and she has lived in South Florida throughout her career.

Michelle started her fitness training and nutrition channel on social media and made herself available to whoever needs her for any advice. She was so into her work and fans, that she went from working at a clinic to being a big social media personality, to eventually gracing the cover of renowned magazines. Lewin was also featured in music albums and has won several IFBB competitions.

She became the world’s most famous female fitness competitor and she is known to be one of the most devoted, hardworking fitness models in the world.

Michelle Lewin competed in Bikini for a few years and we’ve provided her competition history below. She placed well at many shows but decided to take her career in a different direction.

Lewin is known globally due to her impact on the industry and has graced the cover of over 30 magazines which include Sports & Fitness, Her Muscle, Fitness, and Iron Man to name a few. She also has her own website where she sells merchandise, offers training from the FitPlan app, and her book ‘The Hot Body Diet’ (step-by-step exercise and diet plan).

Lewin has over 13 million followers on Instagram and over 8 million on Facebook which is a testament to how iconic she has become over the course of her career. This also proves that she has really learned how to leverage social media to her advantage.

Michelle Lewin was born in Maracay, Venezuela and she’s currently based out of South Florida. Lewin first started her career with modeling at a very young age and aside from being a fitness model, she also graced the catwalk as a fashion model. The Venezuelan native didn’t let her 5’4″ stature stop her from sharing the ramp with much taller models either.

Being a fitness freak, she started taking hold and realized her potential and that investment of time in the gym to sculpt her body would lead her to do wonders in the industry. All this was seen by one of her close friends, who suggested Lewin enter the NCP bikini competition.

Michelle was also approached by many photographers, offering for her work with many famous modeling and fitness companies, and that was the time she emerged as a cover model.

She says: “A friend of mine encouraged to compete in the next NPC bikini competition so I gave it a shot. It was such a thrill to step on stage!”

Lewin’s career is a true testament to what can be achieved with lots of dedication and hard work. She is an array of inspiration for many. She eventually moved away from the catwalks and modeling for cover magazines to shape her 95lb body into the solid, lean 120lb physique that has garnered so much attention. 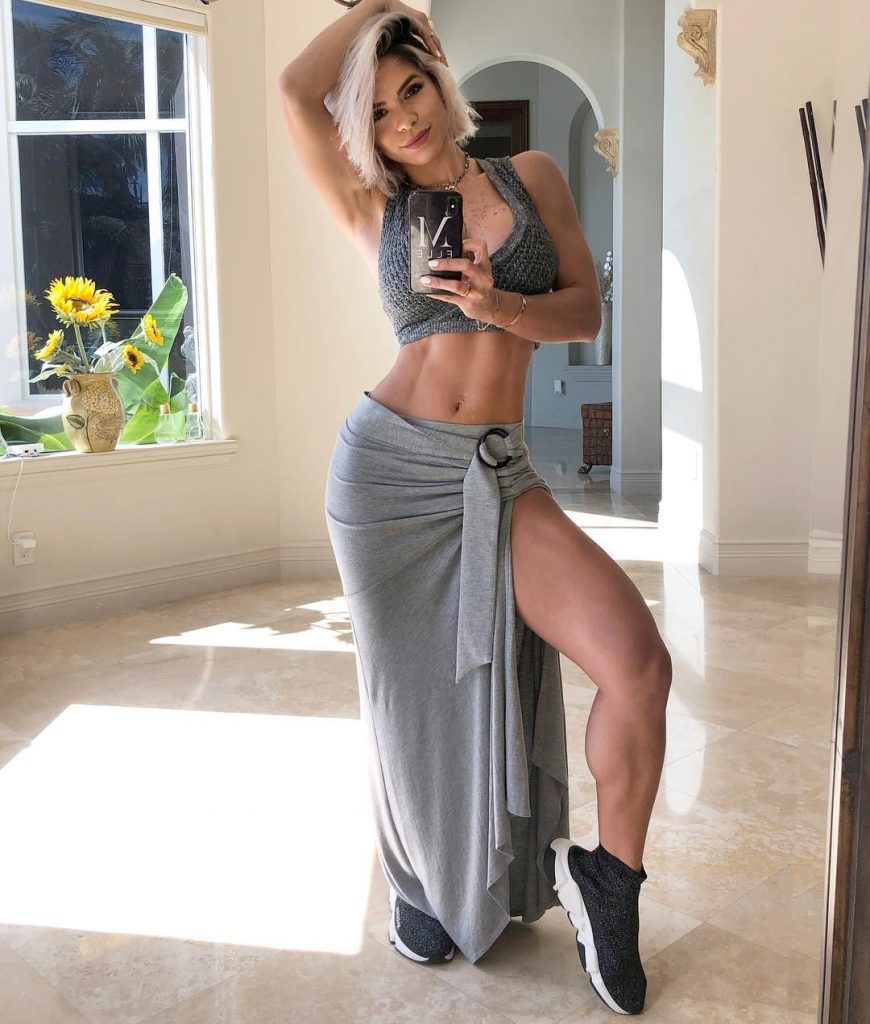 “The abs started to show and I was enjoying the fitness lifestyle after months of intense training. Suddenly the modeling requests were coming from Fitness Magazines and Supplement companies.”

Here’s a workout that Michelle Lewin shared with/courtesy of Simply Shredded. She follows a 5-day split-style training regime which means she typically trains a few different muscle groups per workout. Her sessions include a combination of effective compound and isolation exercises.

Lewin said that when she started training, she’d spend hours in the gym which was a big mistake. She recommended one hour and two at the max. 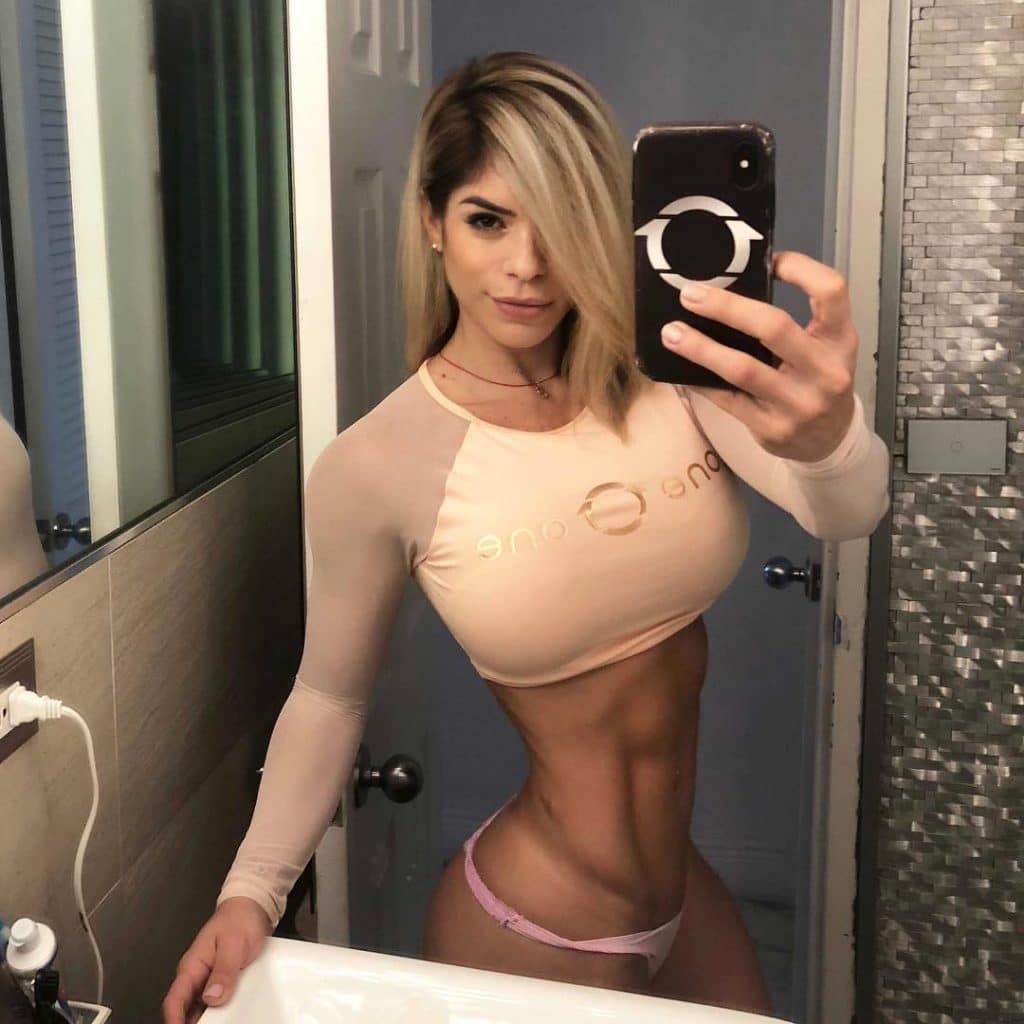 The top three exercises that are among her favorites include:

She always recommends these for getting in shape and to tighten the body, burn the fat, and create a perfect shape.

“I just love to sweat like a maniac. So, whatever I feel like Stair Master, Rollerblading around South Beach Miami or Spinning classes. I keep the intensity high and make sure that I am always pushing my hardest.”

Michelle Lewin is a true inspiration for millions but you might be wondering where she gets her inspiration from. Well, it’s very simple. She looks in the mirror. Whenever she notices a new vein emerging or little changes in her body, this inspires her to work and strive to be even more fit. She also says her motivation is not comparing herself to other professionals, models, or trainers. The inspiration just comes from within and this is something we all can learn from her.

“There’s nothing more motivating than when you find a new vein! Am I crazy?”

Lewin eats a very simple and clean diet consisting of lots of protein, and low carbs. Monday-Saturday she eats a healthy diet and then on Sunday, she eats whatever she’s craving.

Generally, she’ll eat 4 meals per day when she’s traveling and 5 or so meals when she’s home and has more time to prepare her meals.

The following recipe is for protein pancakes which Michelle Lewin often has for breakfast. It’ll make 2-3 pancakes.

Lewin often interchanges her meal options so there’s some variety. She also has some informative content on YouTube detailing her nutritional regime of which she shares some recipes.

Her advice is to eat every third hour because if you go too long without eating, you overeat. For women, she says to keep sodium low to prevent water retention since women have an issue with this already. She says to have carbs in the morning and only at noon. Lastly, she says to eat fruit when you’re craving sugar. Lewin doesn’t even keep sugar in her home which prevents the temptation.

“Every day provides me an opportunity at getting one step closer to becoming everything I want to be”.

There is a lot we can learn from the life, struggle, and success of Michelle Lewin. She’s truly an inspiration to millions of people around the world and her story is a testament of what’s possible with hard work, dedication, and self-belief.

Michelle Lewin is a huge inspiration and one of the most recognizable figures in the fitness industry. She has achieved unparalleled success as not only a fitness model but as a role model as well. Relocating to the US was definitely a good move on her end and it paid off more than she could ever have imagined.

Jay Cutler Shares His Most Intense Garage At Home Workout Ever!

Most kids join sports competitions and training as early as elementary school, which is great for their physical development. However,...