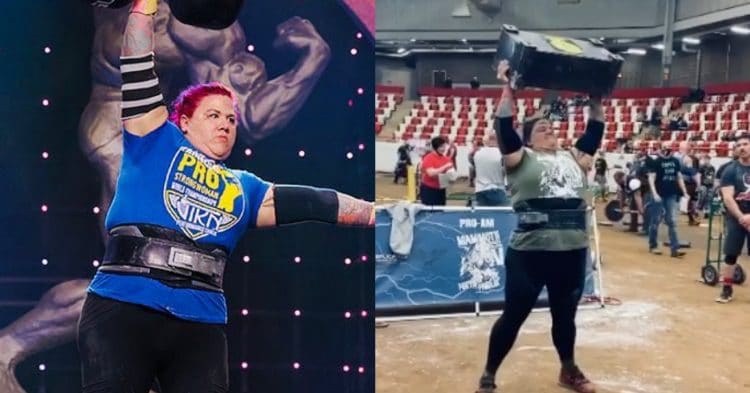 The 2019 Strongest Woman in the World, Jessica Fithen already held the record for the block press before she competed over the weekend. However she pushed that record even further with an epic showing.

Coming into the Strongman Corporation’s Mammoth Strength Challenge V, in Bowling Green, KY, there were a ton of eyes on Fithen. She has earned a ton of accolades over the years to prove that she is worth taking seriously.

Not only did she win the 2019 Strongman Corporation’s Strongest Women in the World, earning a place at the Arnold, but Jessica is a world record holding strongwoman. She boasted the record for the heaviest block press for women, with an 84.4kg lift in 2018.

However this was not enough for Jessica Fithen, as she headed into the Mammoth Strength Challenge V. She decided to try pushing this even further, when it came to the Mouser block event.

For the uninitiated, the Mouser block is a steel block that can be loaded with plates. Strongman athletes will clean the block from the floor and press it overhead.

As Fithen showed on her Instagram, she attempted a 100kg Mouser block press at this event. Not only that, but she was successful in her endeavor, locking out the weight and pushing her world record by a whopping 15.6kg.

Very grateful to David Waters and @strongmancorporation for the opportunity 💜”

Now things got a little dicey there for Jessica Fithen when she tried to move this weight. The first sign of adversity happened when she was transitioning the grip as she prepared to hoist it overhead.

She overcame that and moved on to the pressing portion of her attempt, and things looked shaky there too. Nevertheless, she persevered through the shaking legs, keeping her balance and securing the world record.

Leading up to this contest, Fithen had been hard at work in the training room to prepare for this world record. She already knew she had something special on her hands when she became one of, if not the first woman to block press over 200lb.

It is impossible to overstate the skills that Jessica Fithen possesses and has put on display over the last few years. It seems like things are heading in a direction for 2021 that promises more performances like this.

With the sport of strongwoman really heating up, she is most certainly someone to watch. If you did not already think that to be the case, she proved it big time with this performance over the weekend.