Bodybuilder Iain Valliere was happy with his seventh place scoring at the 2020 Mr. Olympia, and was honored to beat Dexter Jackson and Hunter Labrada 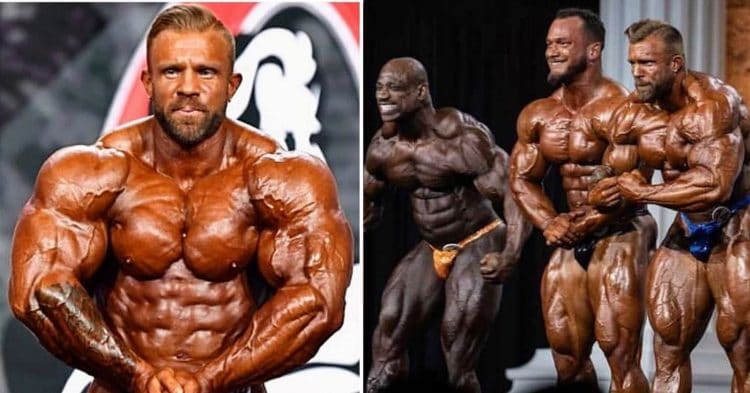 At the 2020 Mr. Olympia, Iain Valliere showed a much improved physique, en route to his seventh place scoring at the event. Now he opens up about the feelings of scoring where he did, beating out some big names along the way.

Nobody was heading into the 2020 Olympia expecting Valliere to walk away with the title. While he had shown some big improvements over the years, he still has some room to grow before he is considered the best.

Nevertheless, he had a ton of attention on him at this show, with fans looking to see how much he had improved. He came in a close second to Hunter Labrada at the 2020 Tampa Pro, and there were questions as to who would look better at the Olympia.

In the end, it was Iain who showed the most improvements, coming in seventh place to Hunter’s eighth place. Yet he revealed in a recent interview, that things were still quite close between the two.

Apparently Iain Valliere had no idea where he placed at the 2020 Olympia, as they only announced the top 5 on stage. However once he tracked down some officials, he found out just how close his seventh place score was.

“They usually give everyone their top ten on stage. They only did the top five this year,” Valliere said.

Valliere goes on to explain that he tracked down a judge, but they were only able to tell him where they scored him. So he knew he had to track someone down backstage to figure out his score, so he could put his mind to rest.

“So my buddy Julian, who’s my training partner, he was like ‘Let’s go back there and find Steve or Tyler or one of these guys, and let’s just ask them.’

“So we walk to the backstage, and I saw Steve and Tyler. They were having a conversation with these guys, and I saw them turn away for a minute so I was like ‘This is my opportunity!’

“Obviously a lot of that was I wanted to know if I beat Hunter, too. That was a big storyline.

“So Tyler was like ‘Oh we had you tied after prejudging, and I didn’t see where the total scores were at night,’ and Steve Weinberger piped up and was like ‘You were a definitive 7th at night, so you were 7th.’

“That was the biggest weight off my shoulders ever. That moment there was like my Olympia win. That was just like… it felt so good. All that was done. I got everything that I wanted out of that Olympia and more.”

Obviously with how tightly contested the Tampa Pro was last year, there was a lot of talk about how Iain Valliere and Hunter Labrada would look on stage together at the Olympia. After besting Hunter onstage, Iain says he felt immense relief.

“I’d be lying if I said that beating Hunter wasn’t very important to me,” Valliere said.

“I know that me and Hunter match up well in a lot of ways, but also have a lot of differences. I was second in Tampa, very deservingly. Hunter was much better than me in Tampa, so I have no arguments there.

“But I knew in my heart of hearts that I was capable of a lot more than Tampa obviously, so I wanted my second crack at that for sure.”

As close as Iain Valliere and Hunter Labrada were at the 2020 Tampa Pro, Iain was nearly just as close to beating the legendary Dexter Jackson at the 2019 version of the event.

He knows that it is not the same as beating a prime Dexter, but Iain is thrilled nonetheless to have that on his resume after the 2020 Olympia, after topping The Blade’s ninth place position.

“Obviously he wasn’t 2008 Dexter or anything, but he’s still Dexter Jackson. He’s still one of the greatest of all time,” he said.

“To at least have one on him before he retired obviously felt good, to be able to say to my kids in 20 years ‘Ah, I beat Dexter Jackson once.’ What he looked like or how old he was are irrelevant,” Valliere laughed.

“It’s a cool thing to have on the resume. I was really happy I beat a lot of good guys at the show, and a lot of guys like Hunter and Dexter that I hadn’t beat before.”

To Iain Valliere, beating these guys that he had previously lost to, spoke to the improvements he has been making. It is true that he has been working hard to improve, so he is someone to watch in the coming years.