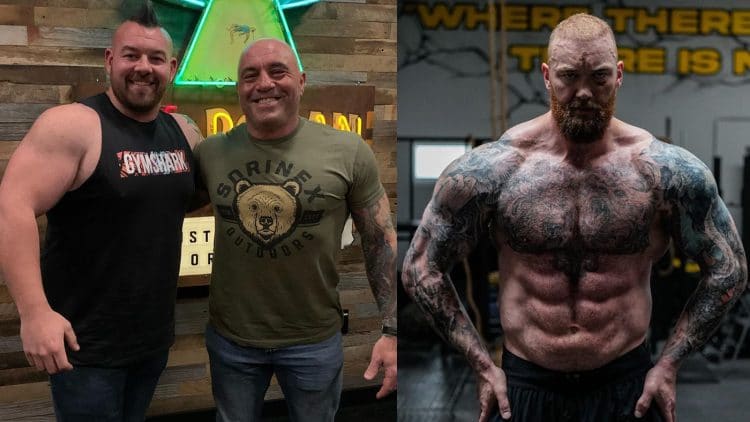 During Rob Kearney’s recent visit to The Joe Rogan Experience Podcast, a casual conversation about the strongman event led to the discussion about Hafthor Bjornsson’s transition to boxing. Rogan is a practicing martial artist and one of the most knowledgeable people in the world of combat sports. While speaking about one of Bjornsson’s training videos, the 52-year-old could not help but appreciate Thor for taking a cerebral approach in learning the sweet science rather than merely relying on his size and power to throw haymakers to translate power.

“He put up a video of him hitting the pads and I have to say, like, he is doing everything right. It’s interesting because he is learning how to box ‘coz he is having these boxing matches. But the way he is doing it is very intelligent.

He is not just like gritting his teeth and throwing his arms as hard and using his physical muscle power. He’s learning how to do it correctly and everything is like real smooth and polished and technical.” Joe Rogan said.

Contrary to popular opinion, combat sports require participants to be relaxed and in full control of their emotions to fight to the best of their ability. The tendency to throw wild punches without focusing on the body mechanics results in unfavorable outcomes on more occasions than not. As the discussion progressed, Joe Rogan appreciated Bjornsson for working on these aspects of the fight game since transitioning to boxing.

Rob Kearney seconded Rogan’s thoughts in the affirmative and highlighted the fact that Hafthor Bjornsson lost huge amounts of weight to get in perfect shape to compete as a boxer. Bjornsson typically weighed in the 200kg (450lbs) range during his days as a strongman. However, he weighed in at 344lbs (156kg) for his professional boxing debut against Devon Larratt on September 18th.

“When you’re fighting you do have to be very relaxed.”

“He lost like, about a hundred pounds. He looks awesome.” Rob Kearney said.

“It’s crazy, it’s like a totally different kind of human now. He is like a big athlete. I wonder what his long-term goals are in that.” Joe Rogan said.

Hafthor Bjornsson has repeatedly asserted that he is ‘in it to win it’, implying that he wants to have a long career in boxing. However, during his appearance on Logan Paul’s Impaulsive podcast, Hafthor Bjornsson elaborated further on his plans. Bjornsson stated that that beating his archrival Eddie Hall will the final destination of his journey.

“I am taking that fight seriously. I want to prepare myself. I want to get the experience in, I want to, like, the end run here is to beat him up. That’s like my final destination.” Hafthor Bjornsson said.

Hafthor Bjornsson and Eddie Hall are bitter rivals since their days as competitive strongmen. The pair were expected to make their pro-boxing debut against each other on September 18th, 2021. However, a bicep injury forced Eddie Hall out of the fight and Thor ended up fighting arm-wrestling ace Devon Larratt as a replacement opponent.

Eddie Hall has resumed training after full recovery from surgery and if things go as planned, he will fight Hafthor Bjornsson in early 2022. Both Hall and Bjornsson are among the most recognized names in strength sports and enjoy a worldwide fan base. Irrespective of the outcome of their fight, it is hard to believe that the prospects of success will deter either of these men from pursuing a long career in the sport of boxing.