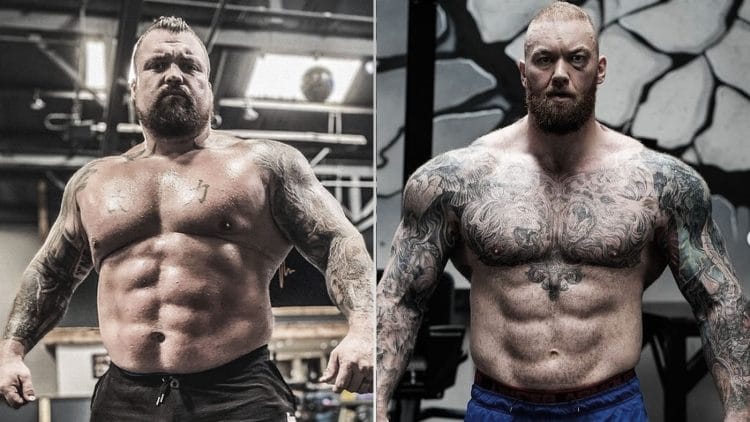 Strongmen Eddie Hall and Hafthor Bjornsson have done a splendid job so far promoting their boxing match. Both parties have routinely engaged in promotional tactics like trash-talking, trolling, and countering each others’ arguments. This has created a lot of hype around this ‘heaviest boxing match in history. In the most recent chapter of the one-upping game, Eddie Hall issued a $100,000 wager to Hafthor Bjornsson for charity.

Speaking in the video, Eddie Hall stated that his bicep was successfully reattached after the surgery. Hall then called out Thor and the promoters to finalize the date and the venue. However, things took an interesting turn when Eddie Hall proposed a wager that the loser of their fight will donate $100,000 to the choice of winner’s charity.

Courtesy to Eddie Hall’s YouTube Channel, you can watch the full video here:

Hall placed the wager based on his perceived lack of progress in Hafthor Bjornsson’s boxing ability. He Stated that he sees Thor as a withered, stressed, and scared old man. Dismissing Bjornsson’s demeanor as a mere façade to cover the lack of confidence, the 33-year-old called for the $100,000 wager.

“In two years since we’ve signed the contract, I haven’t seen a single punch from you that’s made me think, ‘oh, that one would hurt.” Eddie Hall said.

The former strongmen have revealed that their purse for the high-profile encounter will likely be in the seven-figure territory. Although unrelated to the purse, Hall’s wager will likely bore a sizeable hole in the loser’s pocket if Bjornsson accepts it.

Eddie Hall and Hafthor Bjornsson were originally scheduled to fight on September 18. However, a bicep injury suffered in training forced Eddie Hall out of the fight. Bjornsson went on to defeat replacement opponent and arm wrestling ace Devon Larratt via a vicious first-round knockout and has promised to knock Eddie Hall out when the fight eventually happens.

Hall and Bjornsson will most likely fight in March 2022. Even if Eddie Hall is confident in his ability, odds do not favor him at the moment. Hall has lost most of the second half of 2021 to injury and recovery from surgery. Bjornsson, on the other hand, got the necessary experience of fighting on a grand stage and has continued training.

Therefore, when the promoters announce the date and venue for the fight, a burning question will revolve around Eddie Hall’s ability to make up for the lost time. Do you think The Beast can take major leaps in his training and defeat the more experienced Hafthor Bjronsson?