The Strongman legend dominated one of the greatest arm wrestlers ever in the first round of their boxing bout. 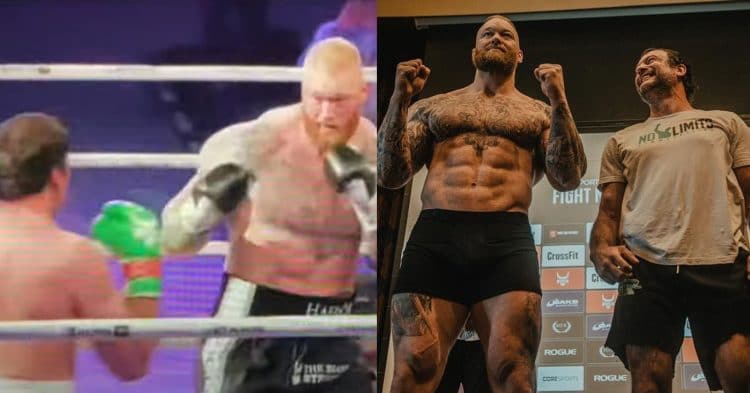 Hafthor “Thor” Björnsson defeated Devon “No Limits” Larratt via technical knockout in the first round of their boxing match that took place on Saturday, September 18, 2021, in Dubai, UAE. The bout headlined Fight Night 3 with several undercards.

The 2018 World’s Strongest Man winner was originally scheduled to face long-time nemesis and 2017 World’s Strongest Man champion Eddie “The Beast” Hall. However, the latter suffered a torn biceps in the lead-up to the event, and Larratt, who’s the #1 ranked arm wrestler in North America, stepped in on short notice.

If you’re familiar with both Hafthor Björnsson and Devon Larratt, you’d know both are very large human beings. But the Iceland Strongman does have a size, weight, reach and strength advantage over the Canadian.

Not to mention, there’s a significant age gap between them, Thor being 32 and Larratt 46 years old.

If Larratt had any physical disadvantages, they were certainly exacerbated due to the fact that he only had 5 weeks to train, while Bjornsson had been training over a year for Hall.

The matchup was scheduled for three six-minute rounds.

However, Björnsson only needed one to get the job done of which he overwhelmed Larratt and put him away convincingly.

Although, we have to credit Larratt for landing a nice hook at the very beginning and holding his own briefly while they exchanged a few blows, but Thor was clearly the more composed and skilled of the two as the round progressed.

The 6’9″ giant’s power and more extensive training gave him the advantage and Larratt started to become even more uncoordinated, eventually succumbing to several punches and a left that forced the ref to call the bout with less than 30 seconds left in the first.

Leading Up To The Event

Hafthor Björnsson and Eddie Hall had been jawing back and forth constantly ever since the announcement of their match-up last year. Nothing changed other than Larratt stepping in and doing his part to promote the bout, claiming it would be the easiest day of his life.

Sending A Message To Hall

After embracing Larratt for stepping into the boxing ring with him, Björnsson, who’s now 1-0 in his Pro boxing career, made it very clear that he wants Hall next.

“My thoughts is just wow, Devon is such a warrior, he has the biggest heart I know, that guy is something else to take a fight with only 5 weeks notice is brave,” he said post-fight.

The interviewer asked if there was anyone he’d want to call out next and it was rather obvious at this point as there’s unfinished business.

“You guys know who I want to fight“. I know he’s at home chilling in the sofa with his popcorn and soda, enjoy your life buddy, I’m going to knock you out soon.”

“I love competing and I have such a respect for this sport. I’ve been watching it my whole life and this sport is without a doubt the hardest sport I’ve tried. But I absolutely love it“, he ended with.

Devon also had some words to say about his matchup with Thor and it’s safe to say he has a new respect for the sport.

“I wish I could have done better you know, I got tons of respect for this boxing game, clearly I suck but wow what a trip man to be in the ring with Thor. It’s totally on my bucket list.”

When asked if he’d do it again, his response was, “I loved it, what can I say, I really did enjoy this, so nervous stepping into the ring. I knew I was underprepared but I knew the experience would be a lot of fun.”

Fight Night 3 was exciting and included other great matchups as well including Stefi Cohen vs Marcela Nieto and CrossFitters Josh Bridges and Jacon Heppner facing off in the ring.

Now we potentially have the anticipated spectacle between Hafthor Bjornsson and Eddie Hall to look forward to.