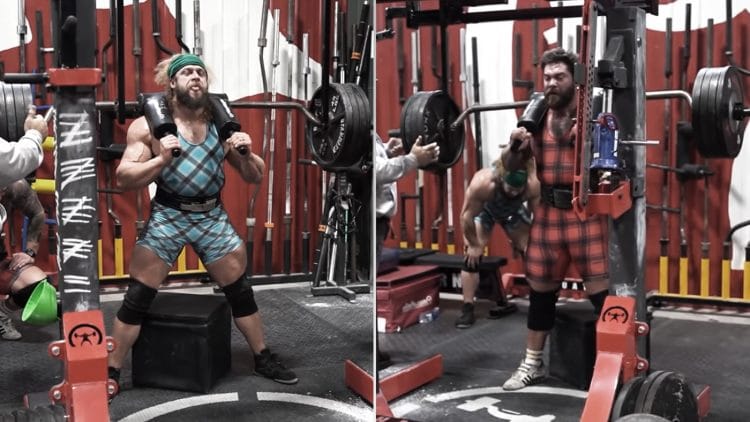 Back in the day, Chuck Vogelpohl and Dave Tate competed on a dynamic box squat day. Box Squat is a move that elite powerlifters use to make maximum progress from the squats. Originally scheduled for 8 sets of 2 reps with 184kg (405lbs), the session took a different turn when Tate decided to add a few more sets to make Vogelpohl give up. However, the latter did not budge and the session soon turned into an all-out war. Both men cranked out 40 sets of box squats in less than one hour and it was Vogelpohl that emerged victoriously at the end.

The squat session is still remembered in the strength sports circle and Dave Tate recalled the end of the session in Jon Call’s YouTube video:

In a career spanning almost two decades, powerlifting legend Chuck Vogelpohl competed in weight classes from 90kg all the way to 125kg. Many consider him to be the most intense powerlifter in the history of the sport and Vogelpohl was without a doubt the strongest equipped lifter of his time. In a career that spanned almost two decades, Chuck Vogelpohl won numerous competitions including the 2006 WPO World Finals. His career bests in each lift using multi-ply according to open powerlifting are as mentioned below:

A fitness virtuoso in his own right, Jon Call AKA Jujimufu is an athlete who constantly tests the limits of his body through various experiments. Be it doing 255lbs bench press while being suspended by resistance bands or doing a backflip with a loaded barbell in his hand, Jujimufu is a versatile athlete that has tried it all.

After training with 2019 World’s Strongest Man Martins Licis, Jujimufu participated in grip challenges. Bodybuilding and powerlifting are not unchartered territories for him either. He last competed at the Hybrid Showdown III in February 2021 and here is the breakup of his lifts from the competition:

Replicating something that an intense powerlifter like Chuck Vogelpohl did requires a special individual. Jujimufu’s track record until now and the tendency to push the limits make him a perfect candidate for that.

Dave Tate and Sam Brown of EliteFTS worked as the spotters for Jon Call and Joey Szatmary’s box squat session. The duo started with 8 sets of 2 reps with 150kg (330lbs). Tate allowed them to rest between the sets. However, the pace of the workout changed for subsequent sets. Each man now had to start his set immediately after the other one finished.

Call and Szatmary completed a total of 30 sets before Tate added another kg (50lbs) to the bar. 43 sets later, Szatmary seemed to be going strong with as much as six reps per set. At this point, it was Jon Call who admitted defeat and the challenge came to an end.