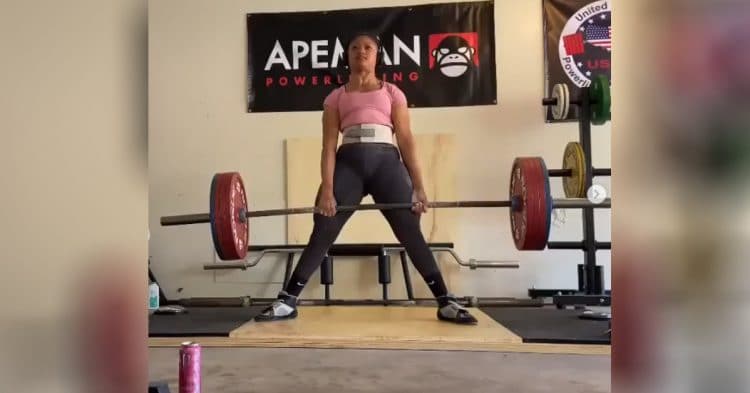 At just 20 years old, Powerlifter Jordanne Panton is a 5x USAPL National champion and IPF world record holder (you do the math). She won several competitions at just 14 years old and several years later she has won several more. She also currently holds IPF world records for the deadlift (185kg/408lb) and total (375kg/827lb) from back when she competed in the teenage 13-15 division.

Panton currently competes in the 63kg class and recently in training, she pulled 485lbs/220kg which is 25kg/55lbs over the current Junior world record.

This was also a 20kg personal record for her and in the same session, she deadlifted 463lbs of which she mentioned in the post is a 10kg PR. So we’d say it was definitely a productive training session, to say the least, and she was stoked to have achieved such impressive numbers.

You can see the lifts below. The first clip is the unofficial world record (485lbs) and the second is the 463lb lift.

The pull was a tough one but she was able to muscle through for the lockout. This lift eclipsed the current Junior record of 195kg/430lbs by a pretty significant margin. And that current record is held by Suzanne Daniel of Great Britain who accomplished the feat back in February of last year at the European Classic Powerlifting Championships.

Panton is confident that it’ll be a good year for deadlifts as she noted in the post. And she’s currently preparing for the IPF World Classic Powerlifting Championships to possibly take place around September after having been pushed back several months due to current circumstances.

And we hope she’ll have the opportunity to show how hard she has been working when the time comes.

Bodyweight Exercises To Avoid And What To Do Instead