Jujimufu Does Deadlift With Backflips For Three Reps 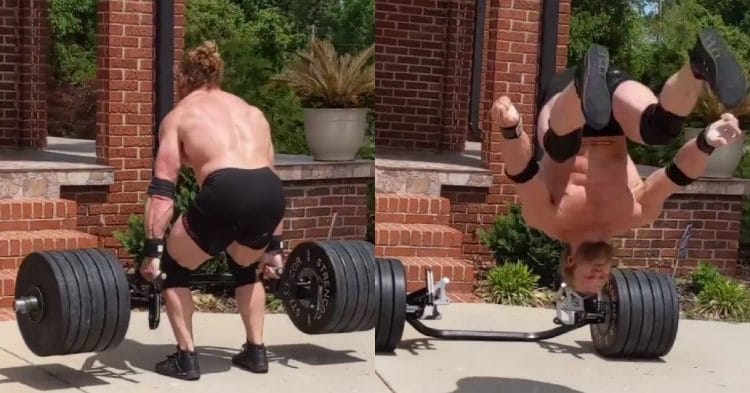 Jujimufu, aka Jon Call, has made a name in the world for his unique ability to combine a muscular physique with incredible gymnastics abilities. However he took things to the next level recently, with a deadlift session that you have to see to believe.

Over the years, Jujimufu has consistently defied the traditional bounds of what people expect from athletes. Not only does he have an enormously jacked physique, but he somehow still manages to stay limber and light on his feet. He is a prime example that it is possible to be big and strong, yet flexible and agile.

This ability was put on display in a big way, with a recent Instagram post from Call. He decided to do some 540lb deadlifts with a trap bar. However, instead of stopping there, he completed a backflip after each rep, doing so three times. It was a truly ridiculous display.

Okay sure, this is technically an ad for Reign Body Fuel. Regardless it is was still an entertaining feat of physical ability from Jujimufu. To do so for three reps could not have been easy, but he managed to do so, before knocking back what he said was his second can of Reign.

Jon Call is regularly showing off his gymnastics abilities. Understandably so, given how impressive they are to see every time. Here he is just a few days earlier, doing some aerobic exercises. The video is meant in a funny way, but it still shows him doing movements you do not typically see from a man his size.

Jujimufu seems to remind us, each time we see him, that he is a physical freak of nature. His skills are always mind-boggling to see in action, and he is always doing something exciting.