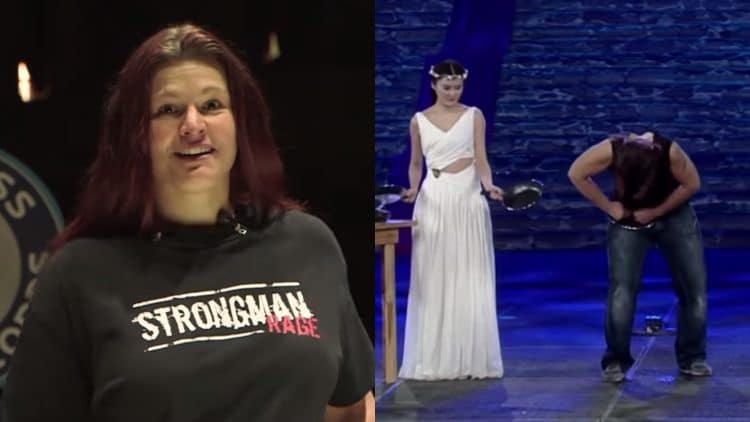 Kathleen Krause is a German strongwoman known best for her truck pulling abilities. However, she got to earn a spot in history for her ability to roll frying pans with her bare hands.

There are some aspects of strongman competition that involve a ton of training and skill. Feats of strength such as lifting atlas stones, and pulling fire trucks seem hard to comprehend. However, there is one common activity strongman and strongwoman athletes do which is a little more feasible: rolling frying pans.

Despite the seemingly smaller scale of rolling frying pans, Kathleen Krause is an expert at this challenge. She proved this in a big way, back in 2015. In a video which recently surfaced, from a Chinese television special, she can be seen etching her way into the Guinness Book of World Records. She did this, by rolling 7 frying pans in a minute, beating out the previous record of “Most Frying Pans Rolled in One Minute (Female)” by one pan.

Technically, Krause managed to roll 8 pans in the video. However, the final frying pan was finished after the one minute timer went off, so it was not counted. Regardless, this was an incredible show of grip strength, which lands her in history books, apparently for a long time to come.

Take a look at the World Record:

The thing about rolling frying pans, which Krause does an excellent job demonstrating, is that it is all about technique. There is a fair amount of grip strength involved, but it is all about applying proper torque and tension to the pan. Although, this is a great way for these athletes to work their grip strength, which is beneficial to other aspects of strength training, like lifting heavy. Oftentimes, the difference between securing an ultra-heavy lift, can come in grip strength.

Brian Shaw was able to accomplish a similar thing, back in 2018, bending a cast iron skillet. However, Kathleen Krause proved to have the best grip strength out of any strongwoman, especially considering the record has stood for five years.