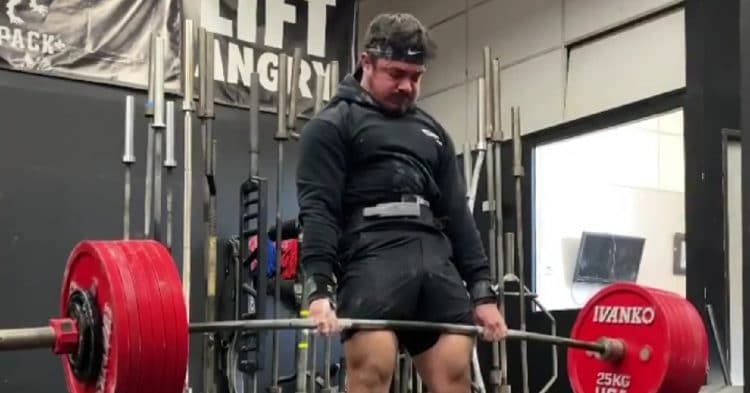 Keith Correa is a 23 year old powerlifter who is proving to be legitimate talent in the sport. Recently he had a performance in training that left us with our minds blown, and ready to see more.

To be honest, Correa has not had the most spectacular career as a powerlifter, so far. As a junior athlete he showed a ton of promise, winning every meet he competes in. However as he transitioned to Open competition he has struggled to find his groove, competing anywhere from the 67kg weight division, all the way up to 89kg.

Currently, Keith Correa is walking around at about 77kg, which makes the lift he recently shared to Instagram all the more impressive. According to the post, he managed to hit a whopping 322.5kg deadlift. In case you were wondering, this means he wound up pulling more than four times his weight.

Keith explains that this 733lb deadlift was a new PR and a part of a training session that totaled out at 800kg. Considering the fact that his competition best is a 712.5kg total, it is safe to say that he has been working on his entire game. Although it is clear that he has been putting a ton of focus on his deadlift.

Keith Correa hits this new personal record just over a month and a half after his previous PR. Moreover, he extended his record by a solid 11lb. Check out the video of that deadlift below:

The amount of growth shown by Keith Correa is extremely promising. He displayed some flashes of brilliance early in his career but has yet to truly breakthrough to the next level. However, at this rate it seems he is putting in the time at the gym, and is fully prepared to take things to the next level.