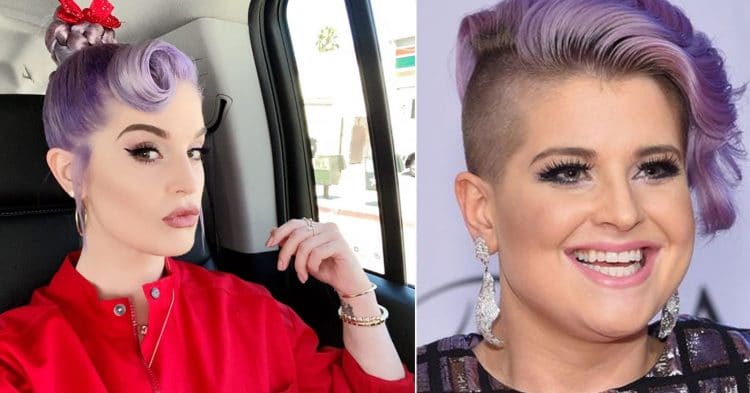 My Kelly Osbourne knowledge is very limited and severely outdated. I know her best from “The Osbournes” reality tv show way back when.  I know she has a brother, her mom’s name is Sharon and of course, her dad is the one and only Ozzy Osbourne. I remember her having a semi-successful music career which started with a cover of Madonna’s “Pappa don’t preach” … aaaaand that’s about it. I’ve seen her name pop up here and there over the years but I was never interested nor bored enough to go on a google spree to see what’s up with her.

I’m seeing articles label her as an actress and fashion designer but I’m still not interested nor bored enough to delve into her body of work. However, what I did find out recently about her is that she lost 85lbs since the beginning of the year! Now that’s a feel-good motivational story I can get behind and support fully. So from what I’m gathering the story goes as follows; at the very end of last year/begging of this year she embraces a variation of the cliched  “new year, new me” mantra and decides she’s gonna lose weight. Now, this is typically a trap people set up for themselves as they believe that with 1.1. they will eliminate all of their bad habits and suddenly develop a habit of working out and eating healthy. However, Kelly was determined to lose weight and put in good work.

Now, she’s nearly 90lbs lighter and at 35 years of age looks better than ever. She, of course, had help from a personal coach- Lacey Stone. The exact program she used to complete her transformation is not entirely known as of yet but her coach spilled the beans for a celebrity news based website that she recommended Kelly do HIIT strength training mixed in with some cardio. Which sounds like a piece of fairly decent advice, I would guess the training included a lot of bodyweight exercises, plyometrics, and maybe even some kettlebells or battle ropes. The strength moves were probably mixed in with stationary bike rounds and/or jogging and running for cardio.

I was a bit curious as to what did she eat because I could already smell the sensationalism about a miracle diet being the key to her weight loss.  So I did some light research, and it turns out I wasn’t all that far off from the truth. Article covering this news for the British “Mirror” tabloid quotes her as saying she was put on a vegan diet and that is the true reason behind her weight loss.  I, personally, would rather say she probably eliminated fast foods and started eating in a caloric deficit. Eating vegan probably helped, sure, but you can also bulk up in weight while being vegan. Just because you stop eating stakes doesn’t mean you will lose weight automatically. It’s a tiny bit more complicated than that.

Either way, I’m always a sucker for a feel-good fat loss/transformation story.  I hope Kelly Osbourne continues eating in a controlled manner and working out hard.