He nearly had it but couldn’t handle the weight at the top and went crashing down to the floor. 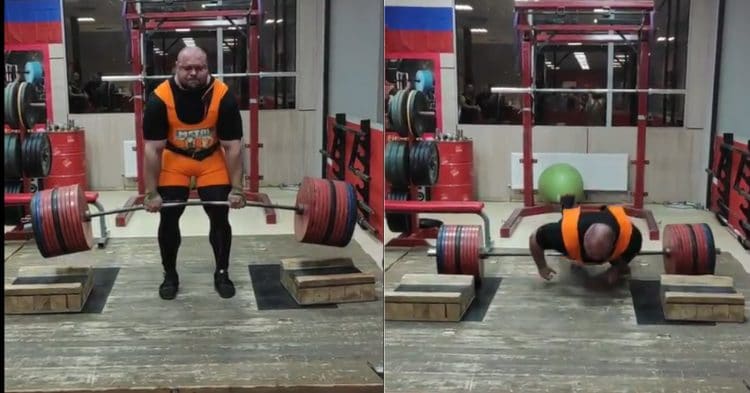 Ivan Makarov is one seriously underrated Strongman. He hasn’t won anything worth mentioning in the Strongman community, but it looks like he is a serious contender to beat Thor’s 501kg deadlift.  He is in deep preparations for September’s Giant Live show which will feature a max deadlift championship event.

As we mentioned before in previous articles, he tried breaking Eddie Hall’s deadlift record but just couldn’t quite get the weight past the knees and ultimately failed his attempt. He’s been training real hard since then and it looks like he might pull a rabbit out of a hat come September.

Last year in preparation for the historic 501kg deadlift, he was pulling 500kg+ but from an elevated platform. The highest he successfully went in training from that platform was 540kg. However, it didn’t matter come event day as Eddie’s record stood to be broken by his rival and future boxing opponent Hafthor Bjornsson.  Since the preparations for the deadlift event are nearing their final phase, Ivan again tried lifting 500kg+ from the platform, but this time he went for a 550kg.  Ivan moves the weight up with all of his might and he gets close but as he tries to stabilize the weight, he falls face-first to the floor.

Being the ihuman beast that he is, he posts this on his Instagram joking away the potentially injury inducing accident. He does say that he is fine, but that fall looked really painful. He could have easily gone face-first into the floor and busted his head clean open requiring stitches. Here’s what he had to say about this painful-looking fall on Instagram.

You can’t underestimate the barbell, it also hits painfully 😂.500kg lifted very easily, I thought 550 would also come in, but no 😂, preparation continues, I’m at home, I’m strong, I’m ready 💪. Friends are sharing a video. Your support is very important for me now.

Regardless of this painful bump, Ivan has to be one of the running favorites for beating the deadlift record and potentially raising it as far as 510kg. He already felt 500kg in his hands and he knows he can lift that on a good day. Now it’s just about getting him in the mindset.

How To Build Muscle And Strength With A Sled