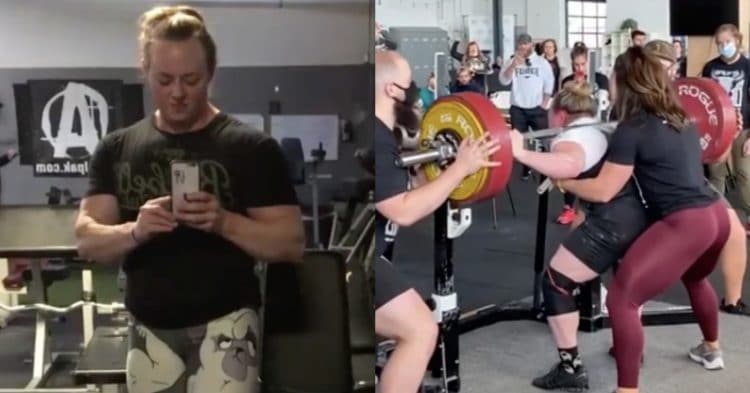 Fan favorite Kristy Hawkins has been on an absolute tear recently, when it comes to her powerlifting career. She took things to another level recently, when she tore through three world records in just a single meet.

Chemical engineering, elite-level bodybuilding, and insane feats of powerlifting; is there anything that Hawkins can not do? After a lengthy amateur and brief professional career as a bodybuilder, Kristy decided to put all of her eggs in the powerlifting basket and devote herself to this craft in 2014 and has not looked back since. This has paid off for her too, as she has seen some incredible performances on the platform, setting world records and dropping jaws at every step of the way.

Kristy Hawkins got back to action in a big way over the weekend, when she competed at a powerlifting meet. Here the 40-year managed to shatter not one, not two, but a whopping three world records at the same time. Even the bench press, which did not see her set a new world record, was better than any bench press that she had hit in competition. It was a solid performance that she uploaded to Instagram for the world to enjoy.

“I was planning to do a meet this weekend in California before everything was cancelled so I just flew to Kansas City, MO to compete instead,” Hawkins wrote. “Finished with a squat of 260kg/573lb (WR), bench of 155kg/341lb (meet PR), deadlift of 265kg/584lb (WR), and total of 680kg/1499lb (WR). I attempted the 600lb deadlift twice but just couldn’t hold onto it because I’m always finding new ways to fail. Super special thanks to @jplifts_sbc for letting me jump in and running a really fun meet and @herbietheluvbug for flying out on short notice to give me moral support.”

This was a strong performance for Hawkins, especially when considering the fact that she had to change the location where she was competing on short notice. She did not let this effect her though, as she still had one of the best showings of her career. Easily the most impressive lift from her was the 573lb squat world record, but this was not even her best squat. Just a few days before this contest, she hit a new PR in training which left her with a 578lb squat.

No matter what she is doing, Kristy Hawkins never ceases to amaze in competition. Congratulations are in order for her ability to hit three world records, and it will be interesting to see how she follows this up.

13 Ways to Avoid Shoulder Pain in The Gym